The allium leaf miner is driving some gardeners and allotment holders crazy! Not only do we need to cover brassicas (cabbages, broccoli, calabrese, brussels etc.) in netting but now with the arrival of the allium leaf miner (and the leek moth) it is beginning to look like we may need to do the same with leeks, onions, garlic, chives and shallots to prevent significant pest damage. This pest reached the UK in 2002 and has spread around the country at an alarming rate.

HOW TO RECOGNISE THE ALLIUM LEAF MINER

The Allium Leaf Miner attacks leeks, onions (almost exclusively spring sown / planted ones), shallots and other members of the onion family. The first problem you will probably notice is that the leaves becomes distorted and don't grow in the normal straight and upwards manner, some leaves will lie on the ground. If you look at the leaves carefully you may also see small, light green / grey marks on it in rows down the foliage - these are the points at which the fly stage of this pest fed on the sap. 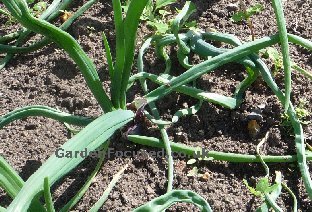 Click picture to enlarge it and see more clearly

The tops of the onion bulbs will also show signs of rotting although this damage is not caused by the leaf miner it is a secondary infection caused by the damage of the leaf miner. If you cut the leaves and the top of the bulbs apart you will eventually find the pupae themselves which are initially creamy coloured, later on brown, and about 5mm long. They have no head section and have no legs. It's OK to eat the parts of onions which are sound but none of the affected onions will store well.

Understanding the life cycle of this pest will significantly help in reducing the damage it does. The flies appear in March and April having overwintered in the soil or plant debris. The female flies lay eggs near the base of young onion plants. During this time she will also make small punctures in the onion leaves in order to feed on the sap. The adult fly can fly for about a mile but normally only travels shorter distances. They are attracted to onion plants by scent.

The eggs hatch and the larvae begin to feed on the leaves initially but then work their way into the surface of the onion bulb. After about a month the larvae pupate and in late September to mid October new flies emerge which again lay eggs near the base of the now mature onion plants. They will feed on the onions and then hibernate over winter ready to emerge as flies next spring. This pest has only two lifecycles in a year.

The official Latin name for this pest is Phytomysa gymnostoma although some articles still refer to it by its old name of Napomyza gymnostoma. For those researching this pest in more detail this article by the West Lancashire Allotments Federation will prove useful.

TREATMENTS OF THE ALLIUM LEAF MINER

When the onions have been infested there is no treatment for them, chemical or otherwise. Remove all parts of the infected plants and burn them.

Preventing the allium leaf miner from causing damage to your onions consists of preventing the adult flies from laying eggs on your plants. If you read the description of the lifecycle above it becomes clear that spring sown onions (as opposed to overwintered ones such as Japanese onions) are at risk from March to April and then again from mid-September to mid-October.

The most obvious method to prevent the flies laying eggs is to cover the crop with insect proof mesh / fleece during the two risk periods.

Another method is to plant onion sets after the first danger period has passed. This works with fast-maturing onion varieties which can be harvested before the second danger period occurs in September / October. Alternatively plant heat-treated onion sets (to avoid bolting) in small pots / modules in an unheated greenhouse or around the edge of the house (to avoid very cold temperatures) at the same time as you would normally outside. Plant them into their final positions in May and they will be ready for harvest before the second danger period occurs.

For those who grow onions from seed, sow the seeds in small pots / modules indoors and gradually acclimatise them to outside conditions in late April so that they can be planted in their final positions during early May.

Other common pests and diseases which affect onions include: