PRUNING PEAR TREES IN THE UK

By David Marks
Pruning pear and apple trees is a task which is often grouped together and while there are many similarities there are also a few key differences between these two types of fruit trees. This article is devoted exclusively to pear trees and how best to prune them.

We describe how to prune for the most common bush tree shape and explain briefly how to prune a pear tree with a central leader.


There are two key differences between apple and pear trees which need to be taken into account when pruning a pear tree. The primary difference is that pear trees will grow far more upright compared to an apple tree. The branches want to reach for the sky in their search for light. In order to encourage early and large amounts of fruit this tendency to grow upright needs to be managed.

The second difference is that pear tree wood is relatively soft compared to apple wood and it is more likely to break under the weight of a full crop of fruit. This weakness needs to be considered when pruning.


The equipment needed to prune a pear tree depends on how thick the branches are and how high the tree is. Three pieces of basic 'equipment' though are always needed and these are:

The above equipment will be sufficient to prune most pear trees up to three or four years old but when the branches begin to thicken and the height of the tree increases the following additional equipment will also be needed:

WHEN TO PRUNE PEAR TREES


For most pear trees the best time to prune is in mid winter to very early spring. If you prune too early the tree may respond by sending out lots of tender shoots which will be severely damaged by frosts. These will then provide an ideal entry site for a variety of bacteria, fungi and pests.

New bare-rooted trees will be supplied from November to March and these should be pruned immediately after they are planted - see the section Pruning Newly Planted Pear Trees below.

THE EFFECTS OF WINTER PRUNING

When a pear tree goes dormant in the winter, nutrients and energy is stored primarily in the roots, main trunk and to a lesser degree the main large branches. Almost no energy is stored in the smaller branches. The diagram below, before pruning occurs in January, shows this more clearly. The dark pink area shows the major energy reserves and the lighter pink areas show less concentrated reserves. 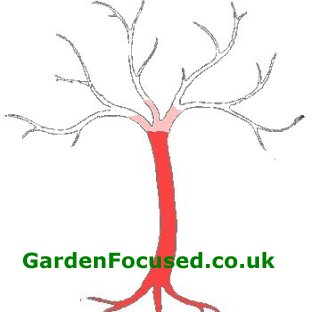 In spring when the tree comes out of dormancy the natural response is to produce new growth in areas where pruning has occurred during the winter. This growth response is concentrated in areas where the tree has been pruned. The diagram below showing the energy reserves in mid April time illustrates the effect on a tree which has been severely pruned in one area only. 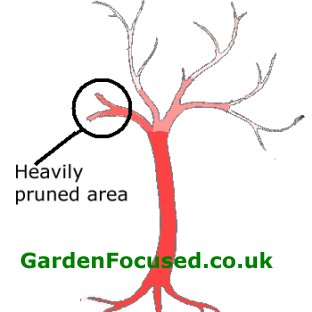 The heavily pruned area receives a higher than normal amount of the energy reserves which causes the tree to produce lots of new green growth in that area. This also has the effect of delaying the production of fruit. Note that this effect is localised and generally does not affect parts of the tree which have not been heavily pruned.

To summarise the effect of winter pruning, it increases the growth of branches and foliage in the next two years and at the same time delays the production of fruit. If done carefully however it can improve the shape and structure of the tree allowing heavier crops in later years.

The most common shape of a pear tree (for the amateur gardener) is an open-centred one where the main leader has been pruned out and four or so main branches grow evenly spaced from the centre. See the picture below of a young tree with four side branches but the main stem (the leader) has been pruned away. Click the picture to enlarge it. 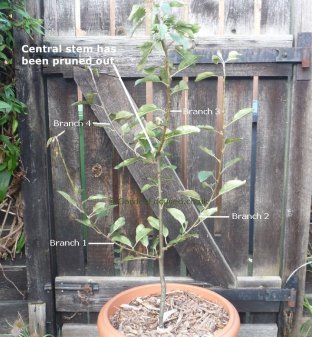 Another shape, more commonly found in some orchards is the central leader tree shape. With this shape the central leader is allowed to grow and three branches are allowed to form at at about 75cm / 30ins above grown level followed by another layer 50cm / 20ins higher and then another layer 50cm / 20ins above that. We suggest that the previous method is probably the best for the amateur gardener. 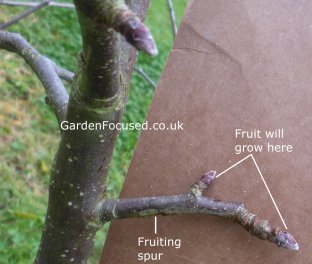 Fruiting spurs will normally appear on stems which were originally grown two years previously. They can appear anywhere on the branches. They will take a year, occasionally two, before they begin to bear fruit. The year after fruiting another one or two fruit buds will begin to appear. The picture above shows a fruiting spur with two fruit buds on it but they can grow and form many fruit buds.

After six or seven years a fruiting spur will begin to become congested with fruit buds and also the cropping capability will decline. At this stage it's best to gradually start pruning off older fruiting spurs which will encourage new, healthy ones to appear elsewhere.


Summer pruning of pear trees is normally reserved for espaliers and cordon shaped trees but it can  also be used to force a pear tree into bearing fruit if it is reluctant to do so. The normal reason for a pear tree not flowering and bearing fruit is that it is growing in perfect conditions! If you get the soil nutrients on the high side side, correct moisture levels, a good loam type soil and the tree is growing in full sun all day it will in all probability take a year or two longer to bear fruit compared to a tree which is in less ideal conditions.

To encourage a pear tree to bear fruit you need to encourage it to produce fruiting spurs. To do this lightly prune the current year's growth by a quarter to a third, do not prune older wood at all in summer. The best time to summer prune a pear tree is in early to mid June time, never prune between mid July to late November.

What you are doing by summer-pruning is reducing the tree's ability to store energy because it has fewer vigorous branches with lots of leaves on them to absorb the energy of the sun. If summer pruning is done around June time the tree will not produce new vegetative growth because it can detect that daylight hours will soon be reducing and autumn is only a few months ahead. Instead it will put much more of its energy into producing fruiting spurs which will bear fruit the next year.

HOW TO PRUNE YOUNG PEAR TREES

This section describes how to prune pear trees in the first two years. If your pear tree is older than this click here for details on pruning older pear trees.

This section deals with pruning a pear tree which you have recently bought and planted. First decide if the tree is a one year old or a two year old. This should be made clear to you when you bought the tree or on the labels that come with it. If you don't know, then as a rule of thumb a one year old tree will have less than six side branches, normally two or three. A two year old tree will have five or more side branches. Read the instructions which came with the tree and follow their guidelines. 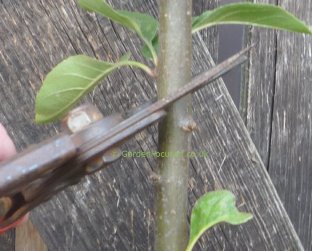 Prune a new one year old pear tree in winter after it has been planted. Normally the tree will be about 150cm / 5ft tall but this varies. With the tree planted you should cut it to a height of 90cm / 3ft above ground. This may sound harsh but this then allows the tree to put all its energy into producing branches at the correct height. Make the cut just above a bud and slant the cut so that any water settling on the top will run away from the bud.

Tidy up the tree by cutting back any branches to about 5cm / 2in. That's it for a one year old tree.

A two year old pear tree should have previously been pruned as detailed above when it was a one year old. This applies to two year old new bare-rooted or container grown trees as well as those already growing in your own garden.

The pruning used for a two year old tree is important because it will define the base structure of the tree for the rest of its life. Although we show you a real life tree in this section every one will be different. Understand the overall objective behind this stage of pruning and you can apply it to almost any pear tree which has been correctly pruned at year one.

Remember, the description above is the ideal and almost all pear trees will need some compromise.

When pear trees get beyond three years old each tree is sufficiently unique in its own right to make specific advice about pruning very difficult. Differences in the variety, previous pruning history and environmental conditions all give rise to different tree shapes. However, the same general principles apply to pruning all established pear trees. Those principles are: