By David Marks
Pear trees are less common compared to apple trees in the UK but the fruits are far more juicy and in many cases sweeter. Lack of a small amount of pear tree knowledge appears to be the main reason for not growing more pear trees.

The key factors in successfully growing pear trees are the rootstock used, the variety of pear tree, understanding your local weather conditions and when / how to harvest and store pears.


If you grow a pear tree from a seed and leave it to grow on its own roots you will end up with a massive tree which can easily reach 6m to 7m (20ft to 23ft) high. The fruit will be well out of the reach for picking unless a ladder is used, it will cast a large amount of shadow and will suck up moisture and nutrients from a wide area. Another, often ignored, problem with large pear trees is that they are difficult and sometimes impossible to spray with pesticides. These disadvantages are not the ideal for almost all UK gardeners!

Pear tree growers, both commercial and amateur, were provided with an ideal solution to tall growing pear trees in the mid 1920s when East Malling Research made Quince rootstocks available to the general public. A rootstock is a variety of tree which restricts the size and enhances the growth characteristics (disease resistance, fruit size and shape, survival in adverse conditions) of pear trees when they are grafted onto it. Currently, the vast majority of pear trees commercially grown in the UK are on Quince C or A rootstocks. 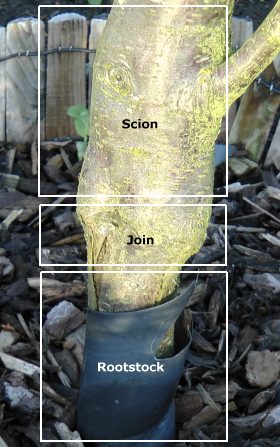 Different areas in the world have preferences for different rootstocks because local conditions differ and require a rootstock which does best in those conditions. In the UK the following rootstocks are commonly available to the amateur gardener:

It's clear that the rootstock of a pear tree is the most important factor in its final size. Our recommendation for most amateur gardeners would be to choose the Quince A rootstock. For smaller gardens its size can be further reduced by an annual prune in June. Quince C may be more suitable in the following conditions:

After the choice of rootstock, local growing conditions are the most important factor as far as tree height is concerned. Pear trees thrive in a rich loam soil that has good drainage but at the same time a regular supply of water. They also grow better (and produce more fruit) in a full-sun position for as much of the day as possible.

FORMS AND SHAPES OF PEAR TREES

Trees can be grown in all shapes and forms but the most common pear trees in the UK for amateur gardener are as follows:

The majority of pear tree varieties are self-sterile which means they need another variety (not the same variety) nearby which flowers at the same time for pollination to occur. Only when pollination occurs will fruit begin to form. Two common varieties which are considered self-fertile (i.e. they do not need a pollination partner) are Concorde and Conference. In most conditions they will produce a crop of pears as stand alone trees.

Pear trees are pollinated by bees and a few other insects but in reality you are relying on bees. In most suburban and urban gardens there is a likelihood of a suitable pear tree(s) for pollination being grown nearby but this is by no means guaranteed. Remember, far fewer pear trees are grown in the UK compared to apple trees and this can make pollination of a single pear tree problematic in many areas.

To guarantee success you need to grow two matching pear tree varieties in your garden and the two trees shouldn't be of the same variety. The only other consideration is that they must flower at roughly the same time. Pollen is produced in the flowers and matching flowering times is the key to successful fruit production.

If only life was that simple! Various companies and organisations have tried to group pear tree varieties into what is called pollination groups. The theory is that varieties of the same group will pollinate each other because they flower at the same time. In practice a given variety will also pollinate others in groups next to them as as well. Take the example of Conference pear tree which is in pollination group 3; it will be not only be capable of pollinating other varieties in group 3 but also groups 2 and 4. This is because the flowering time of a pear tree is roughly three weeks and therefore varieties in different groups can overlap each other as far as pollination is concerned.

The first complication occurs because some organisations do not use "numbers" to define pollination groups, instead they use letters and the two do not necessarily correspond. Even comparing the "numbering" system, different organisations use different numbers for the same varieties.

What seems very strange to us is that none are specific about the dates when a variety will, on average, be in blossom. Possibly this is because each year has different weather conditions which can significantly delay or bring forward the dates of blossom. But this is not a problem in reality as the following example shows. Let's say we agree that the average date, in the average UK area, for Conference producing blossom is the third week of April through to the first week of May.

In a good year weather wise this date might be brought forward by a week or two. But the critical point is that if Conference flowers two weeks earlier than normal so will all the other varieties of potential pollination partners, so pollination will not be affected. With this in mind, our unique table below shows two pollination date classifications for all the common pear tree varieties. The RHS classification and a date when, on average, you can expect blossom production to be at its peak.

We suggest you personalise the results to the weather in your home town by clicking here. This will make the dates as accurate as possible. It only takes a minute and will cause all dates on this site to be accurate for your home town. The setting will last for six months or more and can be checked by looking at the top of every page where your home town setting is clearly displayed.

Varieties in this group will pollinate others in groups 1 and 2:

There are no common varieties of pear trees in  group 1.

Varieties in this group will pollinate others in groups 1, 2 and 3

Varieties in this group will pollinate others in groups 2, 3 and 4

Varieties in this group will pollinate others in groups 3, 4 and 5

Pear trees are sold as either bare-rooted or in containers. A bare-rooted tree will have been grown in open ground at a plants nursery and then dug up when it is dormant, November to February are typical times. Almost all the soil is removed from the roots, they are then packed ready for sale either to direct customers or via the internet. The first key advantage of a bare-rooted pear tree is the lower cost compared to a container grown tree. This is especially the case when buying over the internet because the postage costs will be far lower. Another advantage is that more varieties are grown as bare-rooted trees giving you a bigger choice.

The disadvantage of a bare-rooted pear tree is that they are normally only available for sale during the months November to early March because they must be dormant at the time of sale.

Container grown pear trees have the single advantage that they can be sold and planted at any time of the year. They are normally, however, more expensive and the choice is restricted.

PLANTING AND CARE OF YOUR PEAR TREE

Click here for full details of how to plant and care for your pear tree. We explain in detail how to plant both bare-rooted and container grown trees, how to stake your tree if necessary and ongoing care throughout its life.


We have temporarily disabled more questions because we are unable to cope with the workload of answering them at the moment. We are seeking more staff to help with this problem.