Article by David Marks
Mulberry trees have been grown in the UK dating back to Roman times but there are a large number of misconceptions about them. Firstly some truths, they are beautiful, large trees often reaching over 15m high depending on the variety. Aged examples display stunning gnarled and contorted branches.

As far as the fruit goes, one species is king for flavour, Morus nigra, commonly called the black Mulberry. White and red Mulberry fruits are most definitely second class and simply aren't sold in the UK for their fruit.

In 2017 the RHS gave a new hybrid type of Mulberry, 'Charlotte Russe', the title of Chelsea Plant of the Year. The plus points for this new tree was that it fruits on old and new wood, producing fruit in as little as a year after planting. Your normal Mulberry tree would take about eight years from an initial cutting to produce fruit.

Even more dramatic is the fact that 'Charlotte Russe' is naturally dwarfing, growing to an average height of only 1.5m / 5ft making it ideal for small gardens and container growing.

But the RHS forgot to do the one thing which actually mattered, taste the fruit! The plant supplied to them had only unripe fruit on it and unripe mulberries are notoriously bad tasting. In fact, there is an art in harvesting mulberries at exactly the correct time to get that ever-so-fruity taste.

How could the RHS do that you may ask, I have also asked the same question? But there is not one single mention of the flavour of this new hybrid reported in 2017. Possibly because no one at the RHS had ever tasted the fruit in the UK?

As at 2018, the only UK supplier of Mulberry 'Charlotte Russe' is Suttons. Their only reference to the taste of this variety is a mere two words - "great tasting". That's it, literally! Lots of superlatives about its size, its speed of growth etc. but only two words about its taste.

The cost of this new variety (only available through Suttons) is £17.99 plus £4.99 postage, totaling £22.98. And that's for a tree (if you call it a tree) which is 20cm / 8in high! That is truly, gob-smackingly, incredibly expensive, especially so because mulberry trees (including this variety) root almost 100% of the time from cuttings - propagation is almost foolproof.

Well, we have bought one, purely on the basis of maybe saving you the expense if it doesn't prove to live up to expectations. But maybe it will, who knows? So expect an update to this article in 2018.

If you have bought a Charlotte Russe mulberry and would like to leave your comments about it then please scroll to the end of this article, read comments from others and then send in your own.

Suttons don't state the full Latin name for this variety on their sales website, they simply call it Mulberry Bush Charlotte Russe. This is significant to us because from time immemorial, the only Mulberry tree fruit worth tasting is from the Morus nigra or black Mulberry. The other varieties are simply also-runs by a large margin.

We strongly suspect that Charlotte Russe is not a Morus nigra, it may be a one in a million chance interspecies hybrid, possibly between Morus nigra and a white Mulberry. But that seems very unlikely (if not impossible) because of the genetic make up of Morus nigra compared to other Mulberry varieties.

Genetically, Morus nigra has 308 chromosomes whilst other Mulberry trees have only 28 chromosomes making hybridisation between the two almost impossible. The Latin name of Charlotte Russe would seem to be Morus rotundiloba.

So far, we can find only one report on the internet of someone who has grown and tasted the fruits, the article can be found here. The lady who wrote the article (Beryl Randall) sums up the flavour as follows:

"When totally black they are juicy and taste very sweet but have absolutely zero flavour. When picked juuuuust before all the red vanishes they taste like a memory of mulberry, but have a slightly odd rubbery texture and not much in the way of juiciness".

Certainly, I will report back in 2018 with my own impressions. For others who have purchased this "tree" from Suttons I would be extremely grateful to receive your comments / questions. There is a form at the end of this page where you can send them to us.

FEBRUARY 1st 2018
The Muberry Charlotte Russe arrived from Suttons in a commendable six days after ordering and you can see below how it looked after unpacking it. 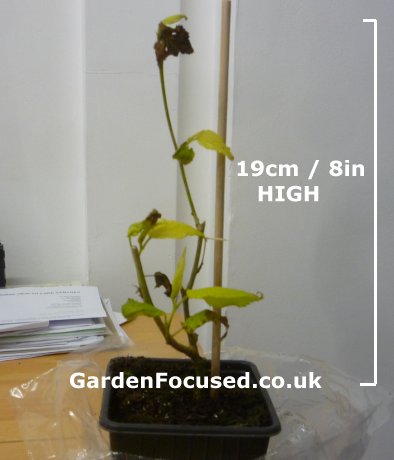 Yes it does look a bit bedraggled but at this stage of year it should really be dormant so its appearance is not out of order. What is rather surprising is the very small size of the tree given that it cost £22.98 including postage. Expect the next update in late February to early March when we pot it up. In the meantime, we will keep it outside but in a protected position and against a house wall.

APRIL 19th 2018
All the fruit trees on my allotment are bursting into life now, except one, the Mulberry "Charlotte Russe" from Suttons. I won't consign it to the compost heap just yet but to me it looks as dead as a dodo! 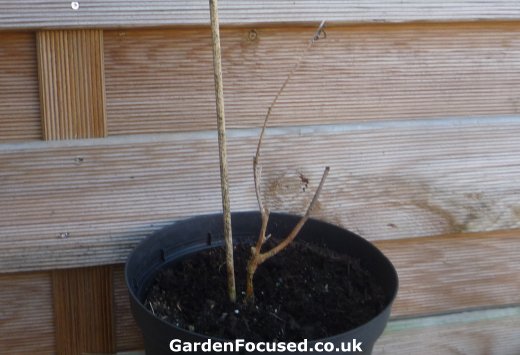 No sign of any buds at all. Very disappointed. I will give this tree a couple more weeks and if there is no sign of growth I will be asking Suttons for a refund. I will keep you updated.

OCTOBER 2018
The "tree" has been consigned to the compost heap, a complete waste of time.

COMMENTING NOW TURNED OFF FOR THIS SUBJECT