Sylvia was raised in British Columbia, Canada and first released in 1987. It was specifically bred to be weak growing, upright and suitable for growing in containers.

Use the checklist below to decide if the Sylvia cherry tree variety is correct for you and your garden. If this is not the correct variety, see our cherry tree varieties page, to select another variety which may suit you better. 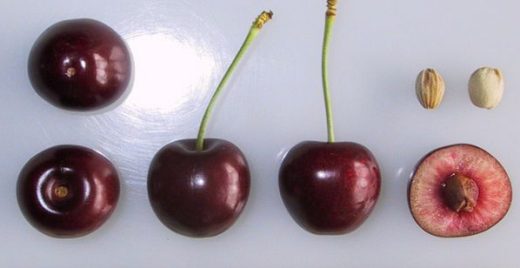 WHERE TO BUY SYLVIA CHERRY TREES

Sylvia is rarely found in your local garden centre but is also available online from a few suppliers on Gisela 5 and Colt rootstock.  It is best grown on Colt rootstock and pruned to the required height. It can be bought as both a potted tree (generally more expensive) all year round or as a bare-rooted tree from October to March (cheaper). We would recommend buying bare-rooted.

Sylvia is in pollination group 3 to 4, mainly self-fertile but will benefit a suitable pollination partner to produce fruit. The following varieties produces blossom at roughly the same time (late April to early May) and are suitable for pollinating Sylvia. They are easily obtainable in the UK:


HOW LARGE WILL SYLVIA GROW

On Colt rootstock Sylvia will grow to about 3m / 10ft tall when it has reached maturity after about 7 years. With an annual prune it can easily be kept to 2m / 6ft high for a manageable tree in most gardens. We do not recommend growing it on Gisela 5 rootstock unless intended for a container.

The variety Sylvia is suitable for growing in containers. Choose one which is grown on the smallest cherry tree rootstock which is Gisela 5.

Use a pot which is heavy if possible (not plastic) to help it not being blown over in heavy winds. A pot size of at least 50cm / 20in wide is best, the larger the better to reduce the need for frequent watering. It's best for stability if the pot is the same width at the top as the base - pots with a small base are more easily blown over.

Ensure you put some stones in the base of the pot before planting the tree to help drainage and provide some weight at the base. Fill with a John Innes loam type of compost although multi-purpose compost will do a similar job. The pot should have several drainage in the base to allow excess water to escape.

Feed twice a year with a handful of fish, blood and bone fertiliser. Don't feed with nitrogen rich fertilisers, they will reduce the amount of fruit it produces. To some gardeners this can sound a slightly harsh regime, especially given the adverts for Miracle Gro and other nitrogen rich fertilisers. But for fruit trees in containers, they really do produce the best fruit (in volume and taste) when slightly "starved" of food.

Water frequently, especially in warm weather, this can mean once a day in warm weather. If you can possibly water with rainwater that is by far the best. Rainwater can be collected in a water butt (see here for our recommendations).