Sweetheart is one of the most recent cherry varieties, it was raised in Canada, British Columbia at the Summerland Research Station, introduced in 1990. The parents of Sweetheart are Van and Newstar.

Use the checklist below to decide if the Sweetheart cherry tree variety is correct for you and your garden. If this is not the correct variety, see our cherry tree varieties page, to select another variety which may suit you better.

WHERE TO BUY SWEETHEART CHERRY TREES

Sweetheart can often be found in your local garden centre and is also available online from several suppliers on Gisela 5 and Colt rootstock.  We recommend growing it on Colt rootstock in most situations. It can be bought as both a potted tree (generally more expensive) all year round or as a bare-rooted tree from October to March (cheaper). We would recommend buying bare-rooted.

Sweetheart is in pollination group 3 to 4, self-fertile and does not need a pollination partner. It can be used to pollinate the following other cherry tree varieties in the UK: 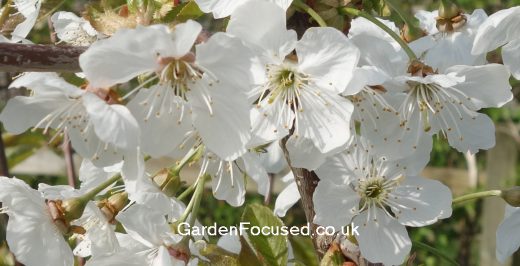 HOW LARGE WILL SWEETHEART GROW

On Colt rootstock Sweetheart will grow to about 3m / 10ft tall when it has reached maturity after about 7 years. It can easily be pruned to reach a maximum height of 2m / 7ft. On Gisela 5 rootstock it will grow into a 2m / 7ft tall tree but will need more care than if grown on a Colt rootstock.