Except for cold parts of the UK, Kordia is a highly under-rated cherry tree. It produces the "blackest" colour of all the cherries, it is resistant to canker and splitting, the cherries are large, fleshy and tasty.

Its only failing is that the blossoms can be affected by frosts but it does flower mid to late in the season, normally around the first week of May. We highly recommend it.

Use the checklist below to decide if the Kordia cherry tree variety is correct for you and your garden. If this is not the correct variety, see our cherry tree varieties page, to select another variety which may suit you better.

WHERE TO BUY KORDIA CHERRY TREES

Kordia often to be found in your local garden centre and is also available online from a several  suppliers. 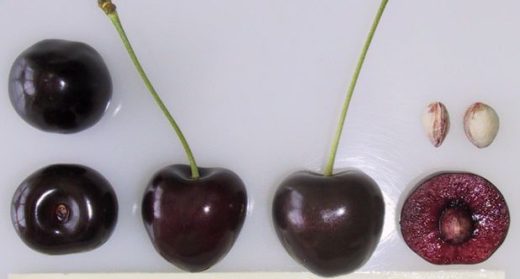 Kordia is in pollination group 4, self-sterile, it needs a pollination partner. The following are suitable cherry tree varieties commonly grown in the UK:

HOW LARGE WILL KORDIA GROW

On Colt rootstock Kordia will grow to about 3.5m / 11ft tall when it has reached maturity after about 7 years. It can easily be pruned to reach a maximum height of 2m / 7ft. On Gisela 5 rootstock it will grow into a 2m / 6ft tall tree but will need more care than if grown on a Colt rootstock.