The unbiased Hoggs Fruit Manual has this to say about the Early Rivers cherry tree variety:

"Fruit, produced in clusters of ten or twelve, two to four being on one peduncle; large, nearly an inch in diameter, roundish heart-shaped, somewhat uneven and indented on the surface, marked with a faint suture, and slightly pitted on the apex, where there is a deep style-point. Skin, shining deep black. Stalk, an inch and three-quarters long, rather slender, green, and with a small, rather deeply-imbedded disk. Flesh, very tender, sweet, and agreeably flavoured. Stone, extremely small. A very excellent cherry; ripe in the end of June. The tree is an abundant bearer." 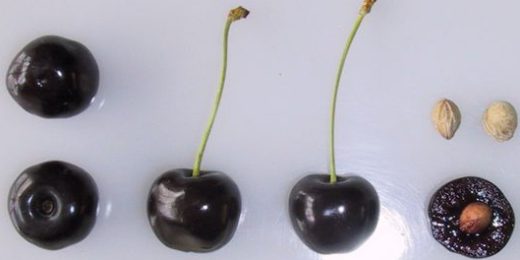 Early Rivers is self-sterile and needs a suitable pollination partner to produce fruit. The following variety produces blossom at the correct time and is easily obtainable in the UK:

HOW LARGE WILL EARLY RIVERS GROW

On Colt rootstock Early Rivers will grow to about 4m / 13ft tall when it has reached maturity after about 7 years. With an annual prune it can easily be kept to 2.4m / 8ft high for a manageable tree in most gardens.