HOW AND WHEN TO PRUNE CHERRY TREES

This article is concerned with pruning sweet (eating) and acid (cooking) cherry trees. Both can be grown in two shapes, as a normal tree (bush or pyramid shaped) or, less commonly, as a fan-trained tree against a wall or other structure.

We have restricted the scope of this article to Cherry Trees which have been grown on dwarfing or semi-dwarfing rootstocks which is the majority of cherry trees in gardens today. The rootstocks are Colt, Gisela 5 and Gisela 6.

WHEN TO PRUNE CHERRY TREES

The best time to prune a cherry tree is when it is growing vigorously, anywhere between mid May to mid August. If the supplier of a new cherry tree has not recently pruned it they may instruct you to prune it immediately on planting, commonly November to mid March. Follow those initial pruning instructions.

The other exception to the May to August rule for pruning is if your cherry tree suffers from a broken branch (wind and weight of fruit are two common reasons). In this case it is best to prune back to good solid wood immediately. The tree will suffer less if a branch has been cleanly cut compared to a breakage where the surface of the broken branch is open and ragged.

DO I PRUNE FRUIT BEARING BRANCHES?


Because the best time to prune a cherry tree is in the summer many gardeners are concerned that they will need to prune away branches which are bearing fruit. In the majority of cases though this is not really a concern. In years one to three we recommend significant pruning in order to establish a good basic shape for the future. However, very few cherry trees will produce fruit in their first three years of life so almost no fruit will be pruned away.

To help you identify which buds are simply leaf buds and which are fruiting spurs (those which will produce flowers and then fruits) look at the picture below. 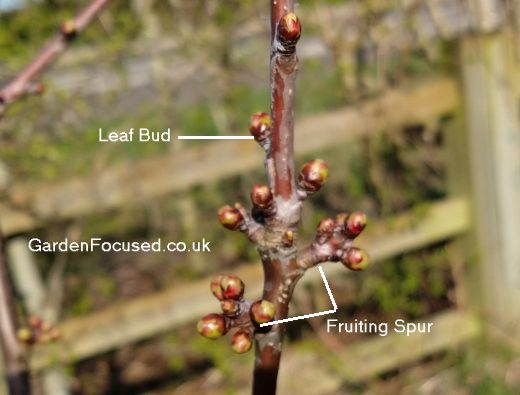 In later years we recommend pruning the top growing stems to keep the height within bounds - these top stems will not be bearing fruit, the fruit will be lower down. Some pruning of the lower shoots is recommended to keep the centre of the tree open and if those inward growing stems are bearing fruit then a small number of fruits will indeed be pruned away. However, cherry trees do produce lots of fruit and the crop will still be large.

In fact, many cherry trees over-produce fruit and this can result in lots of small cherries. Reducing the number of fruits will result in larger cherries.

CAN CHERRY TREES BE PRUNED TO A CORDON SHAPE?


In theory cherry trees can be pruned to a cordon shape but in practical terms it's not advisable. To create a cordon shaped fruit tree you need to prune several times a year and also at several points on the stem. Unfortunately cherry trees don't respond well to frequent pruning because it significantly increases the risk of introducing infections. This is probably the key reason why you very rarely see cordon cherry trees.


The basic principles for pruning a cherry tree are set out below, more specific instructions follow.

Good hygiene is a key rule when pruning any fruit tree but is even more important as far as cherry trees are concerned. The primary aim is to reduce the risk of the tree contracting canker and / or Silver Leaf Disease:

The above three principles are all aimed at reducing the risk of the tree becoming infected because of pruning.

The picture above shows the idea behind pruning a cherry tree to a wine goblet shape. In an ideal world your tree should end up with three or four main branches growing from the main trunk of the tree.

It will be impossible to get it exactly accurate, but however many main branches you choose to have, they should be roughly evenly spaced out to give the tree balance.

Pruning in the first and second year of a cherry tree's life is easier but slightly different because there are fewer branches to prune. The three diagrams below explain how to prune a cherry tree in years one, two and three.

HOW TO PRUNE A ONE YEAR OLD CHERRY TREE

Read the above section entitled "Basic Principles for Pruning a Cherry Tree" above carefully before starting year one pruning. It will help explain the overall process and aims of pruning your cherry tree.

First year pruning is very easy, simply prune back the stem to about 1m / 3ft high in early to late March (see below for why at this time of year). If you are intending to grow your cherry tree as a half-standard bush then prune to 1.2m / 4ft or 1.6m / 5ft for a full standard.

You want at least two branches to form from the main stem and these will come from buds clearly visible. So in year one you may want to prune the main stem slightly higher so that a promising bud or two, in the correct position, is left on the main stem.

It is important to prune a one year cherry tree as soon as possible to help it establish a good structure. At the same time, pruning in winter exposes the tree to fungal infections. With these two conflicting factors in mind we recommend pruning a one year old tree in mid March (late March in cold areas of the UK).

The supplier of your cherry tree will have told you the age of the tree when you bought it. If you don't know the age of your tree use the diagram above and below to decide if your new tree is one or two years old.

Prune on a dry day and use a sharp pair of secateurs. Make the cut a sloping one to avoid water settling on the cut surface. Current advice is not to use a pruning sealant on the cut.

So we can get the timings correct for year two and three pruning, let's assume you plant your new, one year old tree in January 2017 and pruned it for the first time in March 2017. Dates below will be based on this date.

HOW TO PRUNE A TWO YEAR OLD CHERRY TREE

This section on pruning a two year old cherry tree applies to the following two situations:

Select three or four branches to be the main branches. Prune away any other stems / branches as close to the trunk as possible.

HOW TO PRUNE A THREE YEAR OLD CHERRY TREE

Third year pruning is the same as second year pruning. Prune back the branches to a length of about 35cm / 14in. Prune back any side shoots to a length of 15cm / 6in. Prune weak shoots away completely and trim back any stems which are crossing. Prune on a dry day and use a sharp pair of secateurs. Make the cut a sloping one to avoid water settling on the cut surface.

Cut the shoots and branches to an outward facing bud to try and achieve the goblet shape with a clutter free central part. If the position of an outward facing bud only occurs further down the stem to be pruned, prune to that point. Particular attention should be paid to keeping most of the centre of the cherry tree free from branches. This helps the overall health of the tree by allowing free air circulation thus avoiding fungal diseases.

HOW TO PRUNE OLDER CHERRY TREES

We have assumed your cherry tree is on dwarfing or semi-dwarfing rootstock, as the vast majority of cherry trees are nowadays. With this in mind we recommend that every other year you restrict pruning to cutting away shoots and stems which are growing into the centre of the tree. Also prune away any damaged wood and stems which are crossing each other.


Pruning is the largest care job as far as cherry trees are concerned. Established cherry tree on Colt and Gisela 6 rootstocks should look after themselves. If you suffer from a prolonged, very dry period of weather it is worthwhile watering. Thoroughly drench the area in water once. Only water again if the weather remains dry for another two weeks.

If birds are known to a problem the only solution is to net the trees. Our section on protecting cherry trees from birds can be found here.

Our advice for the average gardener would be to give them a good feed with blood, fish and bone in late March and mid June.