Where to Grow Blackberries

When and How to Plant Blackberries

How to Support and Prune Blackberries

When to Harvest Blackberries

How to Propagate Blackberries

HOW TO GROW BLACKBERRIES

By David Marks
Over the last 3 or 4 years a new variety of blackberry has been the "talk of the town", it's called Reuben. Different from other varieties because it is bred to produce fruit on the current year's growth (a primocane) instead of the normal fruit appearing on the previous year's growth (a floricane).

So far Reuben has been a great disappointment to most gardeners, producing weak growth and very few fruits. See the comments section at the end of this article which back up this conclusion from several amateur gardeners in the UK.


WHERE TO GROW BLACKBERRIES

Blackberries are well known for growing in shade and indeed they are one of the few fruits which produce a decent crop in those conditions. So if you have a rather shady spot in your garden / allotment where no other fruit will grow then blackberries are well worth a try. One reason for their success in cool, shady conditions is that the blossoms are produced later than for most fruit and they are almost never affected by frosts, even if grown in a frost-pocket. 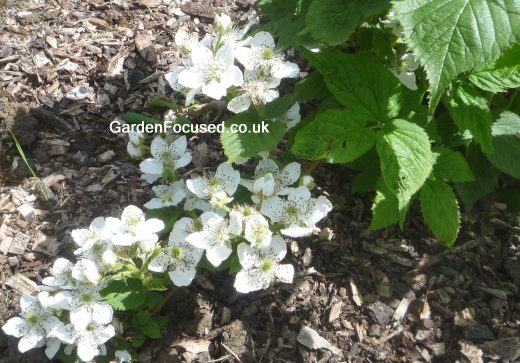 The ideal conditions though are in full sun where good root growth best occurs and the foliage can absorb energy from the sun. As far as soil goes, almost all conditions except chalky ground is suitable. Blackberries also need a free draining soil which can still retain some moisture. Do not plant them in ground which becomes water-logged.

If your conditions are not ideal then choose a strong growing variety which is almost always a thorny one. If you have good growing conditions then you can plant the less vigorous varieties including the thornless types.

When planning where to grow a blackberries remember that a single plant of the vigorous varieties can have a spread of 4m or more when fully grown. Avoid planting these bushes where wild blackberries or raspberries have previously been grown. Pests build up in the soil and these can affect new plants much more than established plants.

Blackberries are self-fertile so one plant only is required for fruit to form. The blossom in May and June time is very attractive and a feature in its own right. You will find that it attracts large numbers of bees which is good for the plant and also for any neighbouring fruit and veg you have.


It's well worth researching the different varieties of Blackberry bushes available in the UK because they do span a significant cropping period, some are much sweeter than others and there are some thornless varieties. See our page on Recommended Blackberry Varieties for the UK. 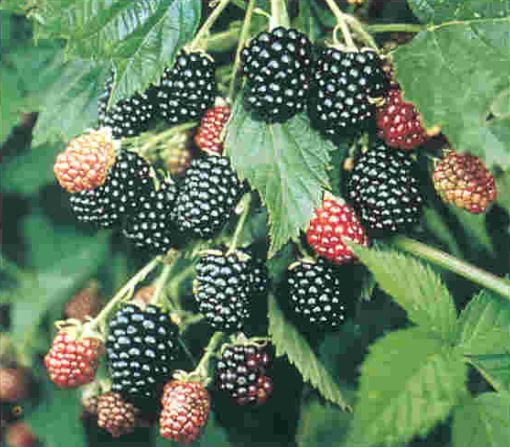 WHEN AND HOW TO PLANT BLACKBERRIES


Blackberry bushes can be planted at any time of year although they will establish themselves best if planted in mid autumn to early winter. At this time of year the ground will still have warmth in it and at the same time rain at this time of year will be sufficient to ensure you can plant them and forget about them. If planting in winter, wait for a time when the ground is not frozen.

If you do plant blackberry bushes from early spring to early autumn they will require watering initially in warm or dry weather.

Before you start to plant them consider how large they may grow. Vigorous varieties will need 4m / 13ft of space from other plants, the least vigorous varieties will require 1.2m / 4ft. This information should be on the plant label. For reference we suggest some planting distances for the most common varieties:

With pot grown blackberries they should planted to the same depth as they were in the pot. For bare-rooted blackberries you will be able to clear a clear soil line on the stem which is the correct planting depth.

Add a layer of mulch around the the plant, about 5cm / 2in deep and 45cm wide will be ideal. Don't let the mulch touch the stems of the plant. This mulch will not only suppress weeds it will also retain moisture in the drier months.

If your bush is any taller than 40cm / 16in, prune the top (s) off to a height of 25cm / 10in just above a healthy looking bud. Use a sharp pair of secateurs to avoid crushing the stem. Make the cut slightly sloping to prevent any accumulation of rain water on the top of the cut stem. Pruning in this way will stimulate the plant to develop a good root system which will help it establish well.

Blackberry bushes have a lifespan of many decades however the amount of fruit produced will start to decline after 15 to 20 years. At that point it's time to start thinking of taking cuttings /layering or replacing the bush.

HOW TO SUPPORT AND PRUNE BLACKBERRIES


In recent years new varieties have been bred which have two key characteristics. They are thornless and not so vigorous. This makes pruning and supporting much easier compared to older varieties which regularly inflicted damage on hands and arms with their vicious thorns.

Whichever variety of blackberry you have, the purpose of pruning is as follows:

The purpose of supporting the bush is very similar to the above:

Pruning blackberry bushes is easy in theory. When the bushes have stopped producing fruit, generally some time between August and October depending on the variety, cut all stems which have produced fruit that season down to the ground. Do not prune those stems which have not produced fruit, they will produce fruit in the next season.

The reason behind this pruning method is that blackberries are biennial plants. Canes grow in one year and produce fruit the next year.

Problems can occur with bushes which thorns on them because the pruning process requires you to reach over and under them. A good, strong pair of gardening gloves is absolutely essential for pruning thorny blackberries. Not only that but the thorns can make removal of the pruned stems very difficult. This is one reason that we recommend you buy thornless varieties, it makes pruning them so much easier.

Supporting the stems also involves tying the canes into the supports. The simplest, and probably best method of support, involves hammering in wooden posts at two metre intervals, the posts should be about 1.8m / 6ft high above ground level. Then tie two rows of wire to the posts at 75cm / 2ft high from the ground and again just below the top of the posts. 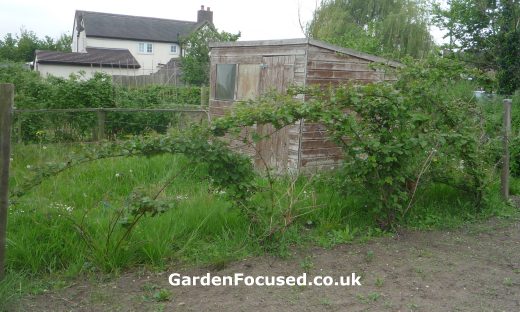 Wire supports for a Blackberry bush

The strength of the posts and wire will depend entirely on how vigorous the variety is. For less vigorous plants such as Loch Ness two posts will be sufficient. For more vigorous varieties such as Himalayan Giant you may well need four posts.

Tying the canes to the wires should start in mid June time and continue as the canes grow. Don't tie the canes too tightly because the will increase in width considerably over the next year or so.


Blackberries will look after themselves (pruning aside) with very little care. The following will help get the best from your plants:

WHEN TO HARVEST YOUR BLACKBERRIES


This is really a matter of trial and error, the timing will depend not only on the variety but also on the weather and growing conditions.

For reference we quote a few varieties below with their average fruiting times. However, these dates can vary by as much as a month depending on the weather each year and it also varies depending on the climate in your area.

The key factor for fruit production is when the blackberries produce their flowers. Expect flowers to be produced in late April to early May in an average year. Judging when fruit is ready for harvest is a rather hit and miss matter because colour is not always an indicator that the fruit is ripe.

Blackberries are easy to propagate. In mid-September bend a healthy looking stem down so that the tip touches ground. Dig a hole about 15cm / 6in deep and place the stem tip in it. Cover with soil. You may need to peg the branch down if it tries to spring back up. Water well and retire for six months!

In April next year cut the stem about 30cm / 1ft from where you buried it. If you dig up the new plant it can then be planted in a new position. Your chances of success? Almost 100%!

You can also take blackberry cuttings in September. Cut a stem so that you have a section about 15cm / 6in long and about the thickness of a pencil. Trim off the thinner top part with a sloping cut.

Dig a small area of the ground adding in some well rotted compost or multi-purpose compost. Place the cutting in the ground and fill in with dug soil so that 5cm / 2in is above ground level. Mark the cutting well so you remember where it is next year. Move the plant to its final position next April when it will have rooted well. 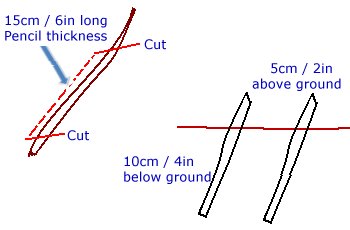 See also the comments section at the end of this article (comment dated 9 March 2017) about taking blackberry cuttings at other times of year.

PESTS AND DISEASES OF BLACKBERRIES


Blackberries are one of the most problem free fruit plants. Only three problems of any significance might affect them. The first is bird damage although normally this is not sufficient to warrant any action. If they really do become a problem the bush can be netted.

Blackberry Cane Spot can be identified as grey to black spots on the stems and occasionally on the leaves. If this occurs prune away affected stems as soon as possible to prevent the disease spreading.

Mouldy fruit can sometimes occur and the cure is to increase air circulation by more severe pruning.

BACK TO MAIN FRUIT PAGE