Worcester Pearmain were commonly grown commercially in the UK but have mainly fallen out of favour except as a specialty apple. They date back to 1873.

Features which might convince you to grow this variety are that it is partially self-fertile, easily pollinated by other varieties, extremely attractive red flushed fruit, sweet, juicy and easy to bite into. This variety also withstands cold well (though not wet areas), is used primarily as an eater straight from the tree but also cooks to a good puree texture.


One of the parents of Worcester Pearmain is almost certainly Devonshire Quarrenden, the other is unknown. Hogg's Fruit Manual describes this variety as:

"Flesh, very tender,. crisp, very juicy, sweet, and sprightly, with a pleasant flavour. A handsome early kitchen or dessert apple, ripe in August and September. The tree is a free bearer, and from the great beauty of the fruit is a favourite in the markets. Messrs. Richard Smith & Co., of Worcester, sent me this in 1873."


The medium-sized apples have a base green-yellow background which is largely coloured red, especially on the side facing the sun. The shape is roughly round but this variety is well known for producing slightly lopsided fruits.

They have become renowned for a slight strawberry background flavour but this is not present every year. Because of this, the flavour is sometimes considered only average. However, even without that hint of strawberry this is still a very good tasting apple. Lots of sweetness and juice, these are crisp apples which are very easy to eat. Consider the slight strawberry flavour as a mere bonus and you won't be disappointed. 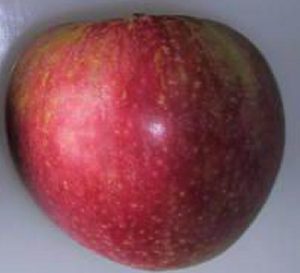 The flesh is very white. This apple is an excellent eater and at the same a good cooker for apple puree. When cooking add less sugar than normal because this apple is naturally sweet.

Worcester Pearmain does well in almost all areas of the UK. It is especially good in cooler areas because the blossom withstands cold conditions well. Avoid it though if conditions are damp because it can suffer from scab and canker.

This apple tree is a partial tip bearer which means it may need to be pruned slightly differently from most apple trees. Click here for more details. In reality though Worcester Pearmain is a heavy cropper and normal pruning techniques suit it just fine. 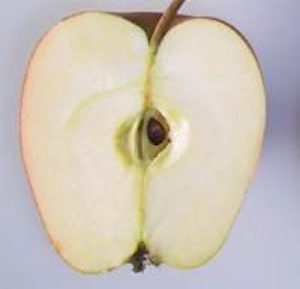 Worcester Pearmain apple trees are slightly less vigorous compared to many others and this makes them good choices for container growing and espaliers. The apples will only keep in good condition for a week or so and should be stored in a fridge. They taste best when left on the tree for as long as possible.

In all other respects they can be grown as normal apple trees, see here.

PESTS AND DISEASE OF WORCESTER PEARMAIN

This variety is has about average disease resistance. the two key areas where it is slightly below average are scab and canker. For the best chance of success, avoid Worcester Pearmain if you live in the wetter parts of the UK. It is ridiculously difficult to create a map of the UK showing average rainfall because a cursory glance of the maps produced show huge differences in opinion.

Some show the entire area of Scotland to be a black-spot as far as rainfall is concerned, others show parts of Scotland to be below average. This difference of opinion spreads all over the UK. Only you really know if your particular area is wetter than average, so trust your own local experience.

Probably the worst problem with this variety of apple tree is scab. It affects the foliage and that then decreases the overall vigour of the tree. It will weaken it significantly if the problem occurs three years or so in succession. See the picture below: 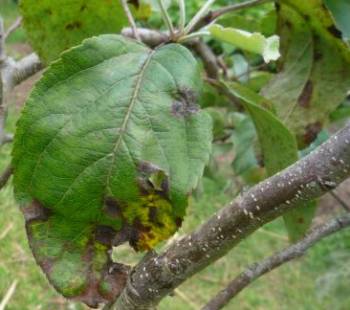 Scab can also scar the fruits as the picture below shows: 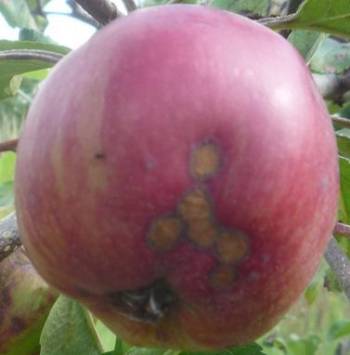 An apple fruit infected with Scab

Our own opinion about scab is that you need to spray annually with the appropriate chemical if you want to control it on a Worcester Pearmain and grow edible fruit. See our full article on apple scab here. For those who have six minutes to spare and wish to hear words about scab from the educated, personable and very practical Stephen Hayes, click here for his video on apple scab. It will open in a new window.

We are often asked if apples with scab marks on them are still edible and the answer is most certainly yes. Scab only affects the surface so just slice that bit off and your apple will still taste superb.

Even if you grow this variety of apple tree in a relatively dry part of the UK, canker will always be a risk. It damages the bark of the tree and the only solution is to cut it out as soon as as you notice it. Early action reduces the risk of further infections. See the picture below:

TASTE AND TEXTURE: Sweet and crunchy

REGULARITY OF CROPPING: Average, can miss a season

AWARDS: Awarded a Royal Horticultural Society Award of Garden Merit in 1993 which was reconfirmed in 2013.

SPECIAL FEATURES: An early variety which is sweet and crisp.


The average flowering time (optimum time for pollination) and date when fruits are ripe in the UK for the Worcester Pearmain apple tree are set out below. If you have set your home town we can give you a more accurate estimate, if you have not set your home town (do it now by clicking here) the dates below will be the average for the UK.

Your town has not been set, the average main flowering time for Worcester Pearmain in the UK is the first week of May. Fruit will be ready for harvesting in the second week of September. Click here if you want to set the dates to your home town.


Worcester Pearmain trees are readily available to buy from garden centres, plant nurseries and via websites in the UK. We would choose Crocus as our online suppliers of this variety. They offer good value and customer service.


Worcester Pearmain is in pollination group 3. It is partially self-fertile and will benefit from a pollination partner. Suitable pollination varieties include the following: