Tydeman's Late Orange was raised at the East Malling Research Station in 1930 and it took until 1949 until it was released to the public.

Features which might convince you to grow this variety are that this is a late maturing variety which can very realistically be kept in storage until late March.

The taste is similar to Cox's Orange Pippin, the apples are on the large size and look very attractive. They are strong growers, good croppers and the blossom is beautiful. Disease resistance is better than average.


The parents are Laxton's Superb and Cox's Orange Pippin. The intention behind breeding this variety was to produce a Cox's tasting apple with better disease resistance and they did a good job.

The size of a fully grown Tydeman's apple is slightly larger than normal if the tree is prevented from over cropping. The green background is more than 50% covered in red with a skin which is slightly rougher than your average apple. The colouring is variable between apples from the same tree but in general the skin is dull rather than shiny. It's not quite a russet apple but somewhere between that and a smooth skin. The apples have a definite tendency to grow with one half larger than the other.

The taste is similar to a Cox's Orange Pippin with a good mix of both sweetness and acidity. If you eat this apple straight off the tree it has an over-riding sharp taste. If kept in storage for a couple of weeks that strong acidity starts to fade and after that you have an excellent tasting apple. This variety will store for five months but you need to ensure that their tendency to shrivel is prevented. They are normally stored in airtight containers or loose-fitting polythene bags. Keep them cool in those conditions and you have a very long-lasting apple. 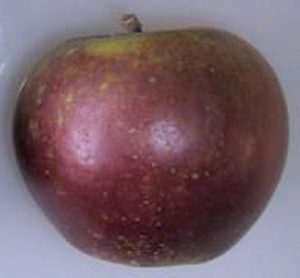 The flesh is light yellow, crisp, crunchy and juicy.

This is a strong growing apple variety in the UK and will produce a larger tree than most others. Our choices of rootstock would be M26 for most conditions or MM106 where the conditions are less than reasonably good. Avoid planting this tree in windy locations where the young branches are more easily damaged than is the average. The blossoms not only look very attractive but they have above average resistance to late frosts. 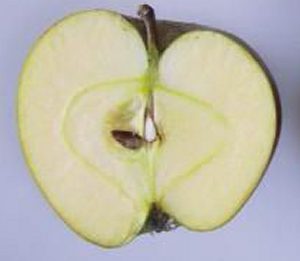 This variety does occasionally miss a year of cropping if left to its own devices. To avoid this, thin the small apples in early June. This will not only help it to crop more regularly but also to produce slightly larger apples. Normal pruning rules apply to Tydeman's Late Orange (see here) and this is one variety where annual pruning is important. The new branches grown each year tend to be thin and liable to wind damage.

Disease resistance is above average and very good as far as bitter pit is concerned.

SKIN COLOUR / TEXTURE: Yellow-green background with lots of red, dull rather than shiny

TASTE AND TEXTURE: Crisp and crunchy. Initially slightly acidic but sweetens after three weeks in storage

REGULARITY OF CROPPING: Average, can miss a season


The average flowering time (optimum time for pollination) and date when fruits are ripe in the UK for the Tydeman's Late Orange apple tree are set out below. If you have set your home town we can give you a more accurate estimate, if you have not set your home town (do it now by clicking here) the dates below will be the average for the UK.

Your town has not been set, the average main flowering time for Tydemans Late Orange in the UK is the third week of May. Fruit will be ready for harvesting in the third week of October. Click here if you want to set the dates to your home town.


Tydeman's Late Orange trees are readily available to buy from plant nurseries and via websites in the UK, they are not so commonly available from garden centres. We would choose Ashridge Nurseries as our suppliers of this variety. They offer good value for money and customer service. Another variety also well worth considering with similar characteristics is Winston.


Tydeman's Late Orange is in pollination group 4. It is partially self-fertile and will benefit from a pollination partner. Suitable pollination varieties include the following: