We very strongly recommend this apple variety for any size of garden in the UK. For smaller gardens and container growing we think it's possibly the best variety ever.

It has all the flavour of a Cox's Orange Pippin but almost none of the pest and disease problems. If you want a relatively compact apple tree which very reliably crops each year with the minimum of attention then Sunset has to be number one on your list. Its single drawback, the small size of some of the apples, can easily be overcome by thinning the fruits in June each year.


One of the parents is Cox's Orange Pippin, the other is unknown. This variety was first raised in Kent in 1918.

APPEARANCE AND TASTE OF SUNSET APPLES

If left to grow of its own accord the apples vary in size from decidedly small to slightly smaller than average. See growing instructions below for more details on avoiding the small apples. When the blossom appears you will be very pleasantly surprised, there will be masses of attractive flowers, much more so than most other apple tree varieties.

The apples look much the same as a Cox's Orange Pippin, a yellow base with red streaks. If left on the tree until they are just about to fall they are sweet with a hint of acidity. Harvest them a few weeks earlier and they have a more acid flavour but still very pleasant. Primarily an eating apple, they cook well retaining some of their shape. They also make good quality cider and a particularly refreshing juice. 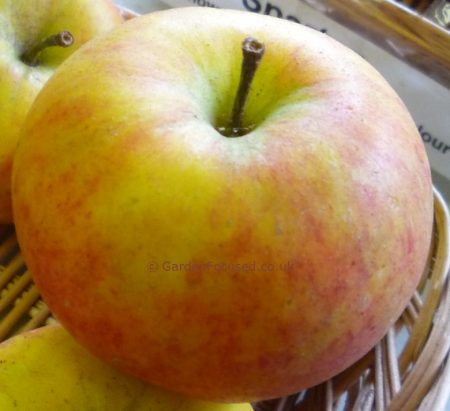 GROWING SUNSET APPLES IN THE UK

Sunset does well in almost all areas of the UK. One of its outstanding advantages is good disease resistance including canker and scab.

Another advantage of Sunset is its ability to regularly produce a crop year in year out. Even if the fruit have not been thinned the previous year you will still end up with a large number of apples.

Many small gardens have room for only one apple tree and Sunset is fully self-fertile so has no problems with pollination when grown on its own. It also pollinates other apple trees very well. It is in pollination group 3, see below for pollination partners for Sunset. Apples are ready for harvest from late September to October (see more precise dates below for your area of the UK).

Sunset has a definite problem with over-cropping which leads to many smaller than normal apples. The solution is simple, thin the fruits in mid June. Each tree will be different but Sunset trees can easily have half their fruits removed. Alternatively, as a general rule thin young fruits so that at maturity 3cm / 1in will be left between each fruit.


Sunset produces fruit buds in the most common way, as a spur bearer. See here for more advice on pruning apple trees.

USE: Eating, cooking, juicing and cider

Your town has not been set, the average main flowering time for Sunset in the UK is the second week of May. Fruit will be ready for harvesting in the third week of September. Click here if you want to set the dates to your home town.


Sunset trees are readily available to buy from garden centres, plant nurseries and via websites in the UK.


Sunset is in pollination group 3. It is self-fertile but in poor years it may benefit from a pollination partner. Suitable pollination varieties include the following:

A comment received from David O concerning Sunset apples is shown below:

"I was reading your article on ‘Sunset’. I agree with most of it. I think that it’s one of the best apples of all time.

I have found that the ‘Cox crosses’ Jupiter, Holstein and Rubinette all have some serious disadvantages. On this soil, Queen Cox does better than any of the three.

Sunset doesn’t seem to have serious disadvantages. In my experience, on rootstock M9 the apples are medium-sized. They become medium-large if they are thinned heavily. However, I am on a very good soil."