The primary reason for growing a Spartan apple tree is the very good-looking fruit. They have a purple-red colour which looks just like a plum. Children love them because they are small apples. They do lack taste but they are juicy, crunchy and sweet which suits many people. The apples can stay on the tree for up to three weeks.

Their primary weaknesses are susceptibility to canker,  apple scab (read below for how to prevent this) and their over-cropping tendency. This can be avoided by thinning the fruits each year in early June.


The parents are McIntosh and Yellow Newtown Pippin. This is a Canadian bred variety which was first released in 1936.

APPEARANCE, TASTE AND CHARACTERISTICS OF SPARTAN


Let's be realistic, we all prefer apples to look good and Spartan excels in this respect. They have a deep purple red colour which has a "bloom" on the surface when picked from the tree. Polish it up for a couple of seconds and it shines like no other apple.

The apples are smaller than average, a slightly flattened round shape. The flesh is pure white and the texture is very fine. Lots of crunch and juice this is a sweet tasting apple. The lack of any depth or aroma in the taste make this ideal as an after-dinner apple, cleansing the palette in a similar way to a sorbet. 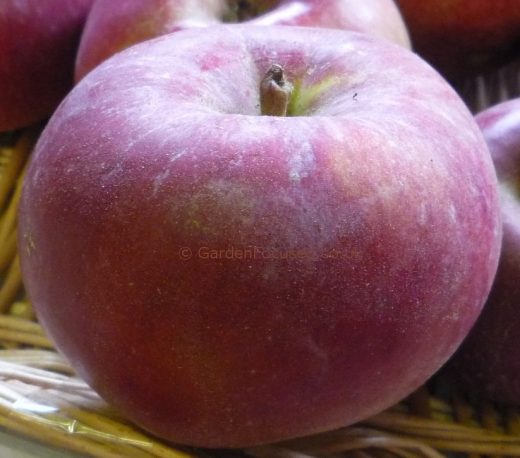 One key characteristic of Spartan apple trees is that they produce too many apples every year. The result is a large number of apples which are all too small. See the pruning section below for details on how to deal with this.

Apple scab thrives in damp conditions so we wouldn't recommend this variety for high rainfall areas. However, apple scab can be easily controlled by the amateur gardener if you only have a couple of apple trees. The first rule is to pick up and burn all leaves and fruit which fall to the ground. If you do this religiously throughout the year then apple scab is unlikely to be a problem in normal to dry conditions.

Spartan produces fruit in early October (see lower down this article for more specific dates) and it has the advantage that apples can stay on the tree in good condition for three weeks or so. Leaving the fruit on the tree for as long as possible is key if you want to fully develop flavour and that trade mark purple- red flush to the skin.

This variety is at its absolute best when eaten straight from the tree but is quite capable of storage for three months in cool conditions. If you can't provide the ideal storage conditions then this a good apple for juicing into an exceptionally refreshing drink.


Spartan has only one special need as far as pruning is concerned so follow our general apple tree pruning guidelines which can be found here.

In common with a few other apple tree varieties Spartan will produce too many apples in almost every year. This results in smaller apples than is ideal. The solution is simple, thin the fruits in mid June. Each tree will be different but Spartan trees can easily have half their fruits removed. Alternatively, as a general rule, thin young fruits so that at maturity 3cm / 1in will be left between each fruit.

Thinning the fruits is an important job with this variety because lots of small fruits mean lots of pips and it takes an apple tree significant energy reserves to produce those pips. It's far better for the health the tree to produce larger but fewer apples.


Spartan is very prone to apple scab, a weakness which is often not mentioned by those companies trying to sell you their trees. Even the Ministry of Agriculture in British Columbia, Canada, home of the Spartan apple, confirm this.

Canker is another disease which affects Spartan trees in particular. This disease, like scab, thrives in damp conditions so avoid Spartan if you live in a particularly high rainfall area. The key steps you can take to avoid canker in apple trees are:


This is not a variety that you will find in every garden centre although some do sell it. It's unlikely to be found in the discount stores or diy centres. It is however readily available at almost all good online fruit tree specialists. Spartan is a tree which has average vigour when grown on reasonable soil and for that reason we would recommend buying it on an MM106 rootstock in most growing situations.

In common with most other apple trees, buying online from a garden centre looks to be the most expensive option although picking up a tree yourself from your local garden centre will give better prices.

Your town has not been set, the average main flowering time for Spartan in the UK is the second week of May. Fruit will be ready for harvesting in the second week of October. Click here if you want to set the dates to your home town.

Flowering and fruit picking dates vary according to the weather in any particular growing season so the above dates may well change slightly from one year to the next. The flowering date above is when the apple tree produces the maximum number of blossoms, it will also produce blossom, although less, a week or two either side of the date given. Even though flowering times may differ from year to year depending on conditions it will, in general, do the same for all apple varieties.

Spartan is in pollination group 4, self-fertile but in poor years it may produce more fruit with a pollination partner nearby. Suitable pollination varieties include the following:

TREE SIZE: Average depending on rootstock and conditions

POLLINATION: Group 4, self fertile, can benefit from a suitable pollination partner. Excellent at pollinating other varieties

SPECIAL FEATURES: One of the most appealing apples as far as looks are concerned.