Laxton's Superb deserves to be grown far more frequently than it is in the UK. One of its parents is Cox's Orange Pippin and it does have that type of flavour but in reality this is a very different apple and some even go as far as to say that this is the best classic tasting apple of all.

Certainly Laxton's Superb has few pest and disease problems and it also withstands the changeable British climate very well. We are hard-pressed to find many weak points with this variety and can find very many positives.


The mother of this variety is Wyken Pippin which was grown in Holland as far back as the late 1600s and first making an appearance the UK in 1714. The father is Cox's Orange Pippin so Laxton's Superb has a pedigree going back several hundred years.

Laxton's Superb was first introduced in the UK during 1922, raised by Laxton Brothers in Bedford. The company first started business in 1885 and sadly they went into voluntary liquidation in 1957. At that time it was bought by Bunyard Nurseries (now also not trading) and a joint catalogue for the two companies was produced for a couple of years.

In anyone's book this is a good looking apple, as far as we are concerned this is one of the best lookers ever. The sunny side of the apple is principally a slightly dull red and with the shade side being orange , yellow and red streaked. "Dull red" is not a criticism it's a compliment, it gives the apple a look of substance and avoids the garish glossy red of some popular varieties.

The size is perfect, enough for several mouthfuls but not too large. The shape of this variety is very regular, consistent and looks exactly how an apple should look. Ridiculous though it sounds, it fills the hand perfectly, just ready to be bitten into! 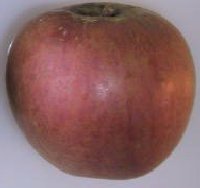 Inside the flesh is clear white and this apple has a nice crunch to it with a tendency to be pleasantly firm, a nice touch of Victorian fruit at its best. The texture of the skin is smooth and easy to bite into.

If some classic apples are slightly acidic for your taste then this variety will be a surprise, it's slightly sweeter than the accepted "best" normal but at the same time it's truly refreshing and juicy. In our experience many prefer the taste of Laxton's Superb to Cox's Orange, it's just possible that some of the apple tasting experts are not quite in touch with popular taste. 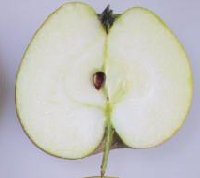 Laxton's Superb is a reasonably strong growing tree and it produces a large crop of apples. In common with Epicure, it can miss cropping on the occasional year especially as the tree ages. The solution to this is to be vigilant and thin the fruit out on those years when it over-produces. This is a self fertile variety although it will crop better when a good pollinator is nearby. Click here to go to the bottom of this page and see a list of suitable pollinators.

Pictures above from public sector information licensed under the Open Government Licence v2.0.

It's difficult to suggest alternatives to Laxton's Superb because it is an excellent variety for UK gardeners with other varieties finding it difficult to compete. When considering alternatives to Laxton's, the key features to look for are a mid to late season apple tree, good looking green / red skin, long storage capabilities. It should also be partially or fully self-fertile and have excellent taste and aroma. The following have some or all of those characteristics:


This apple tree variety is not normally available at a discount in supermarkets or diy stores. It is readily available online and at some apple nurseries. You may also find it at some larger garden centres.

REGULARITY OF CROPPING: Can miss a year, thin fruits to avoid this

WHEN TO PICK / HARVEST: First to second weeks of October

POLLINATION: Group 4, partially self-fertile, benefits from a nearby pollination partner


The average flowering time (optimum time for pollination) and date when fruits are ripe for harvest in the UK for Laxton's Superb are set out below. If you have set your home town we can give you a more accurate estimate, if you have not set your home town (do it now by clicking here) the dates below will be the average for the UK.

Your town has not been set, the average main flowering time for Laxtons Superb in the UK is the third week of May. Fruit will be ready for harvesting in the first to second weeks of October. Click here if you want to set the dates to your home town.


We list below varieties which are suitable pollination partners for Laxton's Superb which is in pollination group 4 and partially self-fertile.