One of the finest apples to have come from Scotland, it was first noted in 1893 and up to the 1960s was grown commercially. Growers stopped producing it because it bruised too easily compared to more modern varieties.

This is a multi-purpose apple and can be used for eating, cooking and making truly superlative apple juice. It crops relatively early in the season as a cooker, leave it a month or so longer and you have a very tasty apple with a slightly unusual texture. Good for growing in many cooler areas of the UK.


Neither parent of James Grieve is known for sure but one of them is suspected to be either Pott's Seedling or Cox's Orange Pippin.

The apples are slightly larger than average and when fully ripe they look very attractive. A yellow-orange base with lots of red streaks, a picture-postcard apple. Slightly oval in shape.

When picked a couple of weeks before fully ripe they make excellent cooking apples. Slightly sweeter than your average cooker, they keep their shape well in pies. Let the apples ripen fully and they sweeten up even more but still have a background acidity. The flesh is crisp but probably nearer a firm pear type texture than a modern apple. It is full of juicy apple flavour.

One of the reasons that James Grieve fell out out of favour with commercial growers was that they bruise easily. So take care when picking and storing them.

In the UK, James Grieve is suited to growing in most areas except the much warmer coastal regions. It does well in the far north, Midlands and most of the south. Disease resistance is on the good side.

Follow the basic rules for planting an apple tree. The trees are average as far vigour and height are concerned. We would suggest buying a James Grieve on an M26 rootstock for a small to average sized garden. If your soil is particularly, poor consider an MM106 rootstock.

Flowering and fruiting times for James Grieve are specifically stated near the end of this article. The good news is that this variety is partially self-fertile and will produce a reasonable crop of apples even when grown on its own. 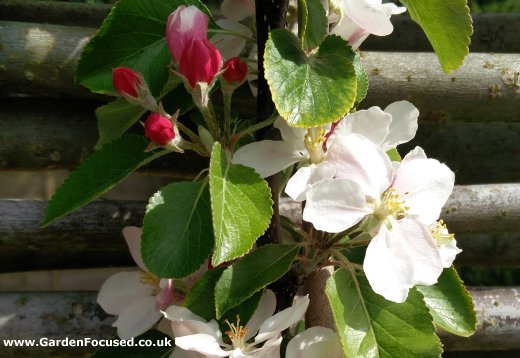 James Grieve is in pollination group three and partially self-fertile. It will benefit even further, as far as pollination is concerned, from neighbouring apple trees in groups 2, 3 and 4. It is also a very good pollinator of many other apple trees. The pollen produced by this variety is less affected by cooler temperatures compared to other varieties.

James Grieve shows slightly above average resistance to pest and disease. The one problem it is prone to is canker. It damages the bark of the tree and the only solution is to cut out the infected areas as soon as as you notice it. Early action reduces the risk of further infections. See the picture below:


James Grieve produces fruit buds in the most common way, as a spur bearer. See here for detailed advice on pruning apple trees.

USE: Eating, cooking and juicing

AWARDS: Awarded a Royal Horticultural Society Award of Garden Merit in 2003, this was reconfirmed in the 2013 trials.

SPECIAL FEATURES: Good taste, does well in cooler parts of the UK


The average flowering time (optimum time for pollination) and date when fruits are ripe in the UK for the James Grieve apple tree are set out below. If you have set your home town we can give you a more accurate estimate, if you have not set your home town (do it now by clicking here) the dates below will be the average for the UK.

Your town has not been set, the average main flowering time for James Grieve in the UK is the second week of May. Fruit will be ready for harvesting in the second week of September. Click here if you want to set the dates to your home town.


James Grieve trees are available to buy from garden centres, plant nurseries and via websites in the UK.


James Grieve is in pollination group 3. It is self-fertile but in poor years it may benefit from a pollination partner. Suitable pollination varieties include the following: