Greensleeves makes an excellent choice of apple tree to grow in the UK for several reasons. Disease resistance is high especially to scab. The apples and foliage grows cleanly, rarely marked at all.

The tree grows to a compact size making it suited to small gardens and containers. The crop is both regular and sizeable, surprisingly so for such a small tree. In tests it consistently produced twice the crop compared to a Cox's Orange Pippin.


The parents are Golden Delicious and James Grieve. This variety was bred at the East Malling Research Station, beginning in 1966 and first released in 1977. It was first given the Royal Horticultural Society Award of Garden merit in 1981 and has retained that ever since.

APPEARANCE AND TASTE OF GREENSLEEVES APPLES

The medium sized apple is green for most of the season, turning a golden yellow as it approaches harvest time. In warm weather it can have a slight pink flush on the sun-facing side. 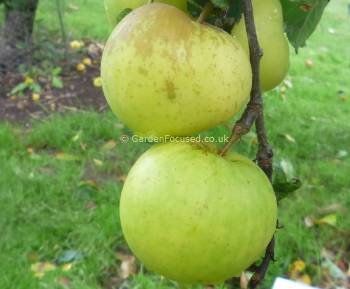 In spring it produces a mass of blossom which is rarely damaged even by the latest of frosts. For many gardeners, the blossom is one of the reasons for choosing this variety. The buds are dark scarlet opening out to a delicate shade of pink and white

The taste is very pleasant and refreshing for most, a good mix of sweetness and acidity. The sweetness develops the longer the apples are kept on the tree. The apples have lots of juice and the texture is crisp and crunchy. Some gardeners mention that it lacks depth of flavour which may well be true, but if you want a juicy, refreshing apple then you won't go wrong with Greensleeves. 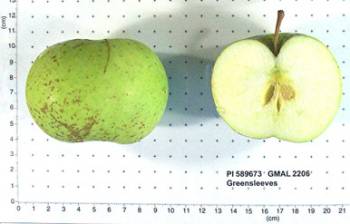 Children in particular like the taste and they also appreciate that the centre of the apple lacks any "woodiness", there is very little left over after eating a Greensleeves apple.

Another particularly pleasing characteristic of this variety is that the trees tend to be smaller than average. This, combined with their upright form, makes them a very attractive addition to any garden.

The number of apples produced is higher than normal and very few apple tree varieties produce fruit as early in their life. You can reasonably expect your Greensleeves apple tree to produce a reasonable crop after two years, a year or two earlier than normal. It does this by producing large amounts of fruiting spurs on both old and new wood.

GROWING GREENSLEEVES APPLES IN THE UK

Greensleeves does well in almost all areas of the UK. Pest and disease resistance is above average and if scab is a problem in your garden then Greensleeves has a high resistance level and is likely to be affected only in the wettest growing years. Fruit is produced in almost all years and lots of it. The blossom is particularly attractive.

Greensleeves can be considered self-fertile, which means it does not need a pollination partner to produce a good crop of fruit. If a suitable pollination partner is nearby it will probably produce more fruit. It is an excellent pollinator of other varieties.

All the basic rules for growing apple trees apply to Greensleeves although we would recommend only pruning when absolutely necessary. This variety is not one of the quickest growers and it is best to let it settle down for three or four years. We suggest growing it on MM106 rootstock in average soil and weather conditions.

It is suitable for growing in containers and in this case we suggest M27 or M9 rootstocks.


Greensleeves produces fruit buds in the most common way, as a spur bearer. See here for more advice on pruning these apple trees.

In some years Greensleeves can over crop so be ready to support any heavily laden, long branches and remember to prune them back during the winter. The other alternative is to thin about a third to half the fruits in mid June. Much will depend on the growing conditions in your garden / allotment. 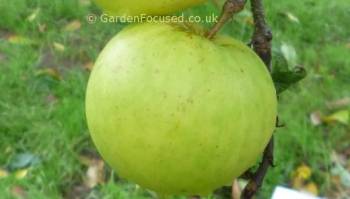 
The average flowering time (optimum time for pollination) and date when fruits are ripe for harvest in the UK for the Greensleeves apple tree are set out below. If you have set your home town we can give you a more accurate estimate, if you have not set your home town (do it now by clicking here) the dates below will be the average for the UK.

Greensleeves apples can remain on the tree for about two weeks after they are ripe which increases the harvest time.

Your town has not been set, the average main flowering time for Greensleeves in the UK is the last week of April. Fruit will be ready for harvesting in the last week of September. Click here if you want to set the dates to your home town.


Greensleeves apple trees are available to buy from a few garden centres, most specialist plant nurseries and via websites in the UK. One online plants nursery we can recommend who supply this variety is Ashridge Trees.


In common with most other apple trees buying online from a garden centre looks to be the most expensive option although picking up a tree yourself from your local garden centre will give better prices.


Greensleeves is in pollination group 2. It is self-fertile but in poor years it may benefit from a pollination partner. Suitable pollination varieties include the following:

TASTE AND TEXTURE: Sweet with good background acidity. Sweeter if left on the tree to fruit fall. Crisp and juicy

AWARDS: Awarded a Royal Horticultural Society Award of Garden Merit in 1993, reconfirmed in 2013.