Golden Delicious is one of the top ten UK best tasting apples. It's sweet with a taste similar to honey. This taste disappears to a large degree when stored cold for supermarket consumption and especially so when transported to the UK from France as so many of this variety are.

Stark Brothers of Louisiana, the first to introduce this apple variety, described it very succinctly; "with one in your hand, you can't be sure whether you are drinking champagne or eating an apple".


The parents are unknown. This was a chance seedling first noticed growing in an apple orchard at Odessa, Clay County, West Virginia in 1905. The orchard owner was Anderson Mullins. It has been estimated that the seedling first germinated in 1899.

In 1914 Paul Stark, of Stark Brothers made the trip from Louisiana to West Virginia to see and taste the apple. He was convinced of its qualities on the spot and paid the sum of $5,000 to buy it. Stark also took back wood from the tree and immediately began to propagating it. 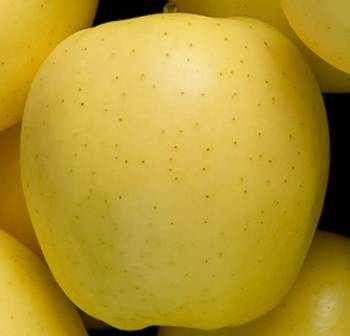 The apple orchard (and the entire farm) soon changed hands and was bought by Anderson's brother, Bewel Mullins. Stark paid him to grow and protect the apple tree for the next 30 years. They even arranged for an electric fence to be erected around the tree to prevent theft of it. This was difficult to achieve securely because the tree was growing half way down a steep hill. The original Golden Delicious tree eventually died in 1950.

When ripe the apples are a golden yellow colour and often there is a red flush on the sun-facing side. The skin is thinner and more tender compared to most other varieties, a feature which most people find very appealing.

Taste is definitely sweet and this appeals to children and adults in the same way. It has an unusual depth of flavour to it, almost a rich honey taste which prevents it tasting too sickly. The flesh is crisp and juicy. Creamy white and it stays that way for quite a time when cut open.

As an eating apple, Golden Delicious is excellent but it does have its limitations. The primary one is that it needs a long summer to ripen and is not suitable as an eater for cooler parts of the UK. However, it makes an excellent cooking apple as this article here demonstrates. In fact they rate it as the best cooker for an apple pie. In France it is always the first choice for pastries and pies.

So for those "marginal" areas of the UK, such as the Midlands, where in some years it will ripen fully but not in all years, it can still be relied upon as a top quality cooker. As well as being a dual use apple the white blossom in spring is a delight in its own right, masses of white, open flowers. 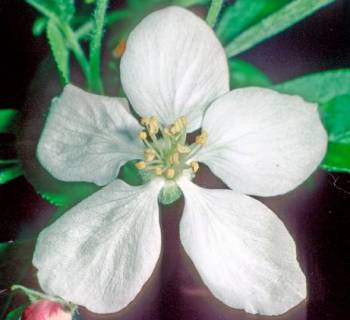 The storage life is very long, and the apples retain much of their texture and flavour even after three months.

Golden Delicious is partially fertile so it will produce a good crop of apples as a stand alone tree but it will be even more productive if a matching pollination partner is nearby. It is an excellent pollinator of other varieties and the pollen shows good resistance to frosty conditions.

The growing strength of the tree is average and you can expect to begin harvesting apples two years after planting. It will reach maximum cropping potential after three more years. This is a mid to late season apple and harvest dates are somewhere between mid October to mid November depending on where you live (see below for specific dates in your area). 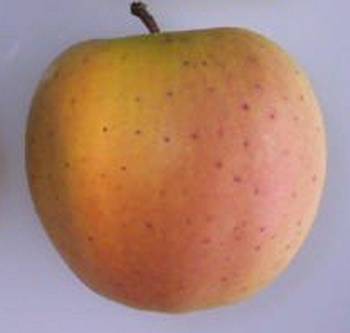 Blossom is produced late in the season which makes Golden Delicious a good choice for frost prone areas of the UK where a late frost can damage the blossom. Disease resistance (in the UK) is average to good. For those in America reading this article, it is very susceptible to Cedar Apple Rust but luckily, in the UK, this is not a problem.


Readily available from online suppliers, you may well find it also sold in some garden centres. It is sometimes sold in the discounted outlets such as Aldi, Lidl, Sainsburys etc.

One word of warning though about buying apple trees from the discount stores. The first potential problem is that they occasionally get the variety wrong and your "Golden Delicious" can turn out to be another variety altogether, possibly a cooking variety. You will, in all probability, only realise this three years or so after you buy the tree.

The other problem you may occasionally encounter with the discounters is that the quality of the tree is not as good as those supplied by the specialist nurseries. Poor storage is often the cause of this. The second cause of low quality trees from the discounters is that they sometimes are supplied with "seconds" from the specialist nurseries. This will always be a risk because those who pay the full price will be supplied with the best quality trees.

VAT, delivery charges and other incidentals all need to be taken into account! We would also advise that buying a bare-rooted Golden delicious is roughly £10 cheaper than the equivalent potted tree. There is no difference in quality so always try to buy the bare-rooted tree.

PESTS AND DISEASES OF GOLDEN DELICIOUS

If a pest is likely to trouble your Golden Delicious it will probably be aphids. The first signs to look out for are the pests themselves on the undersides of the leaves. Often they are not initially visible with the naked eye so a magnifying glass may be required. 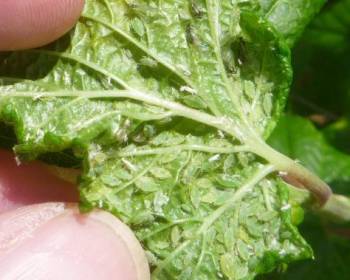 HOW TO PRUNE YOUR GOLDEN DELICIOUS APPLE TREE


This variety is about average as far as tree vigour is concerned so you should have no particular problems pruning it if you follow our step by step guide here.

Golden Delicious is a spur bearer which means that the vast majority of fruit buds are formed on short stems formed along the branches and stems but not normally at the end of branch / stem. This is the normal behaviour for most apple trees. Check out our section on pruning spur bearing apple trees for more detailed information.

This is one of the more difficult varieties to find alternatives for. Golden Delicious can be used as an eater and a cooker, has excellent flavour, is good as far as disease resistance is concerned and produces fruit relatively late in the season.

A few varieties which fit the replacement criteria are:

SPECIAL FEATURES: Excellent for eating and cooking, good pollinator for other varieties.

WHEN TO HARVEST GOLDEN DELICIOUS APPLES

The average flowering time (optimum time for pollination) and date when fruits are ripe in the UK for the Golden Delicious variety are set out below. If you have set your home town we can give you a more accurate estimate, if you have not set your home town (do it now by clicking here) the dates below will be the average for the UK.

Your town has not been set, the average main flowering time for Golden Delicious in the UK is the second week of May. Fruit will be ready for harvesting in the third week of October. Click here if you want to set the dates to your home town.