Gala is the most commonly sold apple in the UK and the key reason for this is they store for long periods of time in refrigeration. Although the apples look good after storage you will notice that much of the flavour has gone making supermarket apples of this variety a very poor second to one picked from the tree.

Although they are are not particularly disease resistant their ability to grow very strongly helps them to shrug off many pests and diseases.


The parents of both Gala and Royal Gala are Kidd's Orange Red and Golden Delicious. Royal Gala is a sport of Gala and has a slightly redder skin. Currently there are 24 known sports of Gala. It was raised in New Zealand in 1934 by J. H. Kidd, it was first announced in 1960 and given its current name in 1964. It is now grown all round the world. In 2010 it became the apple of choice sold by supermarkets when it exceeded sales in the UK of Cox's Orange Pippin.

APPEARANCE, TASTE AND CHARACTERISTICS OF GALA

Individual apples have an attractive red / orange / green skin with the red colours being on the sun side. The fruits are medium-sized and slightly cone shaped. The flesh is white with largish pods for the seeds at the centre. 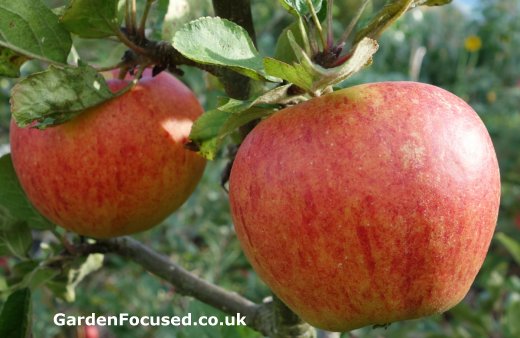 The taste of the apples is definitely sweet with a crunchy and crisp texture. Although they keep for a couple of months (longer when stored correctly by commercial growers) they taste best fresh from the tree or for a week later at the most. The difference between a Gala apple straight from the tree compared to one from the supermarkets is very striking - fresh is definitely best.

The trees grow vigorously and produce a good crop of apples even in warm weather. The leaves are a deep green and the blossom is a particularly attractive white and light pink colour. 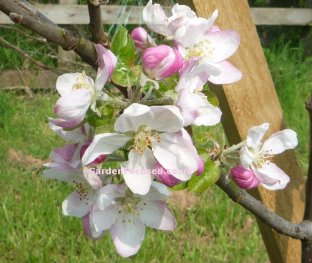 Blossom on a Gala apple tree

This is an easy tree to prune because it produces large amounts of fruiting spurs without any special techniques at all. Follow the normal pruning procedures. Gala has average disease resistance although it is particularly likely to be affected by scab especially in damp conditions. This affects the leaves of the tree, however with a strong-growing variety such as Gala it is unlikely to cause any long term damage. Cleaning up fallen leaves regularly is a good way to reduce the effect of this disease.


Gala trees are susceptible to all the common pests and diseases which attack apple trees. For a comprehensive list of symptoms and cures see our apple tree pest and disease page. Gala does have a reputation, and quite rightly so, of suffering from the following problem in particular:

The classic signs of scab are:

The first course of action to reduce the likelihood or severity of scab is to clear up all leaves as soon as possible after they fall. Sprays are available but they must be applied at the correct time and frequently. See our page here dedicated entirely to apple scab.


This apple tree variety is very common in garden centres, online fruit specialists and even the supermarket and diy stores. The supermarket and diy stores clearly sell these trees much cheaper compared to the specialist but you run the risk of two main problems if you buy from them. The first is that in a year or two disease problems may become apparent which were not visible at the time of purchase. This is very disappointing after such a long time. The second problem you may encounter is that the variety is not as specified on the pack.

If you are buying online from a specialist supplier then we can recommend Crocus who are very competitive on price, quality, delivery and after sales service.

TASTE AND TEXTURE: Sweet and very crunchy when fresh

REGULARITY OF CROPPING: Very regular and a good quantities

POLLINATION: Group 4, partially self-fertile, benefits from a nearby pollination partner

SSPECIAL FEATURES: Attractive looking apples, crops in large quantities. Not a good choice for very damp conditions, but does well in warm conditions.

Your town has not been set, the average main flowering time for Gala in the UK is the third week of April. Fruit will be ready for harvesting in the first to second weeks of October. Click here if you want to set the dates to your home town.


We list below varieties which are suitable pollination partners for Gala / Royal Gala which are both in pollination group 4 and partially self-fertile.