Fiesta was bred by the East Malling Research Centre and first introduced for sale in 1972. The parents are Cox's Orange Pippin and Idared, both excellent varieties in their own right.

Generally a very healthy variety, Fiesta is suitable for growing in all areas of the UK. It is used primarily as a dessert variety suitable for eating immediately when picked but stores extremely well for around four months. This variety can also be used as a cooking apple, holding its shape well. If it has any fault it is probably that it can occasionally be affected by scab although this only occurs in adverse conditions.


The parents of Fiesta are Cox's Orange Pippin and Idared. It was bred at East Malling Research and introduced in 1972. The RHS awarded Fiesta an AGM in 1993 which was reconfirmed in 2013.

APPEARANCE, TASTE AND CHARACTERISTICS OF FIESTA

Fiesta is suitable for growing in all areas of the UK and is a reliable cropper each year. Disease resistance is very good and it is rarely affected by the major diseases affecting some other varieties. 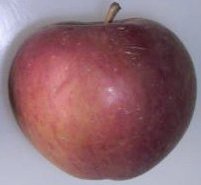 The apples are medium sized, regularly round with a red, orange and green colour. The flesh is creamy-white, very juicy, and crisp. Taste is very similar to Cox's Orange Pippin, sweet but slightly acidic with a perfect apple aroma. It maintains these qualities when stored for up to four months.

Primarily used as a dessert (eating) it also cooks very well, retaining its shape. It produces lots of juice making it ideal for apple juices and cider production. You are unlikely to find apples of this variety for sale in supermarkets and shops. Apples are produced in September to early November (see below for more specific dates in your area), keeping in storage until March. 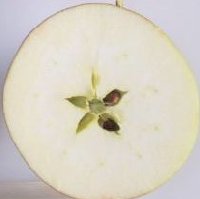 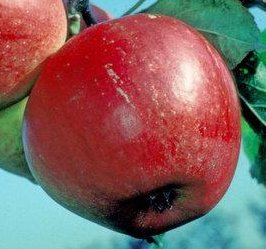 A Fiesta apple ready for picking

BUYING A FIESTA APPLE TREEE IN THE UK


Fiesta is one of the most popular dessert apple trees and a huge number of garden centres stock this variety. It is also very easy to order online in a wide variety of sizes and on all the popular rootstocks. If you order a bare-root tree in November / December then stocks will be high.

If you prefer us to suggest a supplier for this variety then Ashridge Nurseries are offering this variety at a good price and we can personally recommend them.

Remember that all apple trees need a stake to support them for the first couple of years and some require staking for life. So if you haven't got a stake and a tie for your new tree then buy one when you order the tree for convenience. Fiesta is a an average variety as far as vigour is concerned so M27 and M9 rootstocks will need permanent staking. Grown on M26 rootstock it will require staking if conditions in your area are windy or the soil conditions are poor.

Because of the popularity of Fiesta apple trees they can sometimes be found at the lowest of prices in some of the supermarkets and DIY stores. Stick to bare-rooted ones and start looking from November onwards. Last year Aldi were selling them at silly, low prices and the trees were in good condition.

If you buy trees from these cheap sources you run the risk of two main problems. The first is that in a year or two disease problems may become apparent which were not visible at the time of purchase. This is very disappointing after such a long time. The second problem you may encounter is that the variety is not as specified on the pack.


When considering alternatives to this variety the key features to look for are a mid season apple tree, good looking green / red skin, long storage capabilities. It should also be partially or fully self-fertile and have excellent taste and aroma. The following have some or all of those characteristics:

USE: Eating also cooks well and holds much of its shape

TASTE AND TEXTURE: Excellent balance of sweetness and background acidity, crisp and crunchy

POLLINATION: Group 3, partially self-fertile but does even better with a suitable pollination partner (see also the end of this list here).

Your town has not been set, the average main flowering time for Fiesta in the UK is the first week of May. Fruit will be ready for harvesting in the last week of September. Click here if you want to set the dates to your home town.

Fiesta is self-fertile but in years with poor conditions it will benefit from a nearby pollination partner. This variety is in pollination group 3. Suitable pollination varieties include the following: