Falstaff was first introduced in 1971 by East Malling Research with the parents being James Grieve and Golden Delicious.

In 1983 a "sport" (a naturally occurring genetic mutation of the original called Red Falstaff) was discovered in Norfolk, UK. It shares all the qualities of its parent but has a redder, slightly more attractive coloured skin.


The parents of Falstaff / Red Falstaff are James Grieve and Golden Delicious with James Grieve seeming to have the major influence, certainly as far as taste and looks are concerned. It was bred at East Malling Research starting in 1965.

APPEARANCE, TASTE AND CHARACTERISTICS OF FALSTAFF

Falstaff is in pollination group 3 putting its flowering period firmly in the middle of season and ensuring that it will be pollinated by (and help pollinate) the majority of other apple trees.

It has the additional advantage over many other varieties in that it is self-fertile. If you have room for only one apple tree, and pollination from others may be a problem (click here for suitable pollination partners), then Falstaff has to be very high on your shopping list. This variety is tops on flavour, texture and looks. 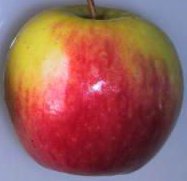 The taste is exactly what most people expect from a modern apple tree, an excellent balance of sweetness and acidity. The texture is firm and crunchy with lots of refreshing juice. The flesh is creamy white. The apples are produced in September / October and if well-stored you can be eating them through until January.

The apple size is medium with Falstaff having a yellow, red and orange skin. Red Falstaff probably looks slightly better with a much redder skin. Disease resistance is good with only scab being a problem but rarely so. The tree is hardy in all parts of the UK and has been awarded an AGM by the RHS. 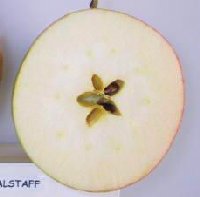 USE: Eating also cooks well and is good for juices

TASTE AND TEXTURE: Good balance of sweetness and acidity, crisp and crunchy with lots of juice

POLLINATION: Group 3, self-fertile but does even better with a suitable pollination partner

SPECIAL FEATURES: Taste and texture are excellent. Easy to grow.


The average flowering time (optimum time for pollination) and date when fruits are ripe in the UK for the Falstaff apple tree are set out below. If you have set your home town we can give you a more accurate estimate, if you have not set your home town (do it now by clicking here) the dates below will be the average for the UK.

Your town has not been set, the average main flowering time for Falstaff in the UK is the second week of May. Fruit will be ready for harvesting in the first week of October. Click here if you want to set the dates to your home town. 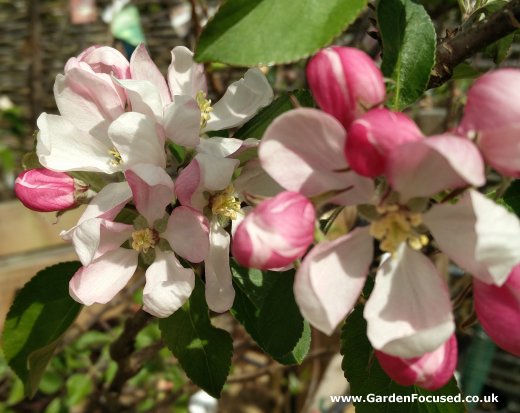 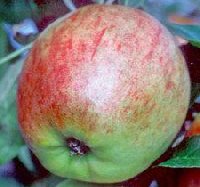 A Falstaff apple ready for picking


Falstaff has good overall pest and disease resistance even when grown in cool and wetter than average conditions. It is only average however as far as scab and aphid problems are concerned.


SCAB
This is a fungal disease which primarily affects the leaves, fruit and the general health of the tree. In spring the leaves have small yellow patches on them which soon turn brown. In July / August the leaves fall prematurely and prevent the fruits from developing correctly. 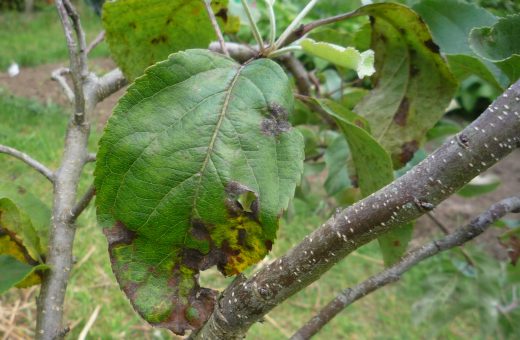 The fruits are also commonly affected and will have greyish, slightly raised or sunken areas on the
surface. This affected area will not grow with rest of the apple causing it to split eventually,
providing an ideal site for other infections to enter. 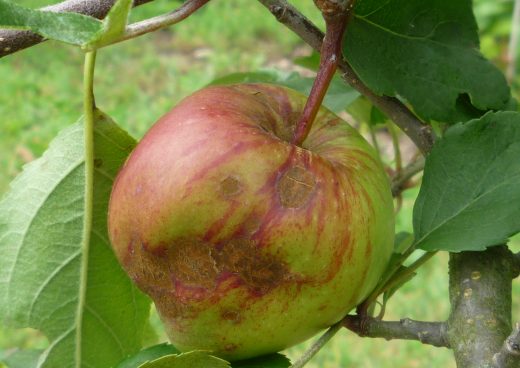 An apple fruit affected by scab

Apples with scab are safe to eat, simply cut out the affected surface area. The surface damage will however, affect the storage life which will be minimal. So eat apples affected by scab before eating ones in good condition.

The primary treatment for the home gardener is to pick up and destroy all fallen leaves and fruit because these contain the spores which will cause re-infection next year. There are no longer any chemical sprays available to the UK gardener for treating scab on apple trees where the fruit will be eaten. Click here for more detailed information on identifying and treating apple scab.

APHIDS
The first signs to look out for are the aphids themselves on the undersides of the leaves. Often they are not initially visible with the naked eye so a magnifying glass may be required. 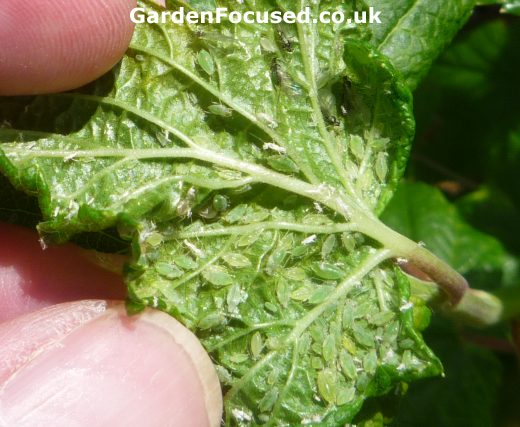 
Falstaff is a spur bearing apple tree which is the commonest type and easiest as far as pruning is concerned. It's very average as far as vigour and shape is concerned so can be pruned annually exactly as described in our detailed page on pruning apple trees.

In summary, after the initial shape-forming pruning in the first three years of its life, the following principles should be applied with each annual prune:


Both Falstaff and Red Falstaff are available to buy from garden centres, plant nurseries and via websites in the UK. Red Falstaff is probably easier to find nowadays and we would recommend it because it has a deeper red colour.

In common with most other apple trees buying online from a garden centre looks to be the most expensive option although picking up a tree yourself from your local garden centre will give better prices. As far as online websites are concerned none stands out in any particular way as far as this variety is concerned. Simply type in "buy Red Falstaff apple tree" into your favourite search engine and you will be given 10 or so suppliers to choose from.

If you are looking for organically grown Falstaff apple trees, the choice is far more limited. Walcot Organic Nursery sell them at excellent prices and we can recommend them from our own personal experience. Their apple trees have been raised on a Soil Association certified specialist nursery. Their website can be found here.

Wait until November onwards and bare-rooted trees will be in stock at much cheaper prices compared to pot grown ones. We did notice that some of the well-known online suppliers were beginning to run out out of supplies of some forms of Red Falstaff even in September so maybe pre-ordering a bare-rooted tree earlier than November would give you a larger choice.

If you cannot bear the thought of trawling through the internet for a supplier we can recommend  Blackmoor's who look to be good value for this variety when postage costs are also taken into account.

Both Falstaff and Red Falstaff can be treated exactly the same as far as pollination is concerned. They are both self-fertile but in years with poor conditions they will benefit from a nearby pollination partner. They are in pollination group 3. Suitable pollination varieties include the following: