Ellison's Orange dates back to the early 1900s and is still a favourite of many apple connoisseurs. Taste is excellent and full bodied but don't expect quite the same crunchy texture of a Cox. Your Ellison's is a far juicier apple.

Disease resistance to scab and and bitter pit is good although canker is a definite weak area. If your ground is well-drained this variety will grow well in the South and North of the UK.


One of the parents of Ellison's Orange is Cox's Orange Pippin and the other is not 100% confirmed but is almost certainly the French variety Calville Blanc according to Brogdale.

It was bred by Rev. Ellison in Lincolnshire and first marketed in 1911 by Pennells Nurseries near Lincoln who are still trading as a garden centre and plant nursery today. In the same year it received an Award of Merit from the RHS and still holds an Award of Garden Merit (1993).


As far as looks go this variety gas it all. A green background, heavily striped red mainly on the sun side. The red colour turns more orange in couple of weeks just before the apples fully ripen.

The skins are about average for thickness and the key feature of the large amount of juice in the flesh. Medium sweet with a full flavour. Much is made of the potential aniseed flavour but in our opinion it is barely noticeable except when over-ripe. 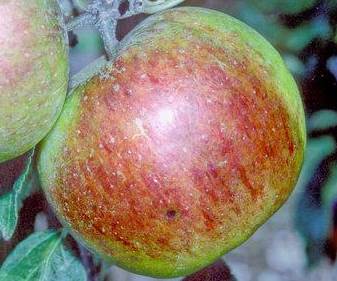 The storage life is very short, a week at most after being picked. This can be spread over a week or two more by not harvesting all the apples at once.

Ellison's Orange is partially fertile so it will produce a good crop of apples as a stand alone tree but it will be more productive if a matching pollination partner is nearby.

The growing strength of the tree is average and you can expect to begin harvesting apples two years after planting. It will reach maximum cropping potential after three more years. This is a mid season apple and harvest dates are somewhere between mid September to mid October depending on where you live (see below for specific dates in your area).

Blossom is produced late in the season which makes Ellison's Orange a good choice for cooler areas of the UK. Combine this with good resistance to bitter pitter pit and scab makes another reason for its suitability for cooler areas. Canker is a serious problem however, so wet and moist parts of the country should be avoided.


Readily available from online suppliers, you may well find it also sold in some garden centres. It is not generally sold in the discounted outlets such as Aldi, Lidl, Sainsburys etc.

VAT, delivery charges and other incidentals all need to be taken into account! We would also advise that buying a bare-rooted Ellison's Kernel is roughly £10 cheaper than the equivalent potted tree. There is no difference in quality so always try to buy the bare-rooted tree.

PESTS AND DISEASES OF ELLISON'S ORANGE

This variety has good overall pest and disease resistance but canker is a major problem. To stand a chance of success, avoid Ellison's Orange if you live in the wetter parts of the UK. It is ridiculously difficult to create a map of the UK showing average rainfall because a cursory glance of the maps produced show huge differences in opinion.

Some show the entire area of Scotland to be a blackspot as far as rainfall is concerned, others show the west of Scotland to be below average. This difference of opinion spreads all over the UK. Only you really know if your particular area is wetter than average, so trust your own local experience.

Canker  damages the bark of the tree and the only solution is to cut it out as soon as as you notice it. Early action reduces the risk of further infections. See the picture below:

HOW TO PRUNE YOUR ELLISON'S ORANGE APPLE TREE


This variety is about average as far as tree vigour is concerned so you should have no particular problems pruning it if you follow our step by step guide here.

Ellison's Orange is a partial tip bearer which means that some of the fruit buds at the end of stems, just where they are likely to be pruned off. This is not normally a problem because sufficient buds are normally produced further back down the stems. Check out our section on pruning partial tip-bearing apple trees for more detailed information.

Because this particular variety is prone to canker we would always inspect the tree more regularly compared to other varieties so that any problems can be dealt with before they get out of hand.

When looking for an alternative to Ellison's Orange take into account the excellent flavour of this variety. You will be looking for a mid season variety which produces good looking and full coloured apples. Disease resistance will need to be good.

Cox's Orange Pippin does not appear in the list below because it has significant pest and disease problems. A few varieties which fit the replacement criteria are:

STORING QUALITIES: One to two weeks

WHEN TO HARVEST ELLISON'S ORANGE APPLES

The average flowering time (optimum time for pollination) and date when fruits are ripe in the UK for the Ellison's Orange variety are set out below. If you have set your home town we can give you a more accurate estimate, if you have not set your home town (do it now by clicking here) the dates below will be the average for the UK.

Your town has not been set, the average main flowering time for Ellisons Orange in the UK is the second week of May. Fruit will be ready for harvesting in the last week of September. Click here if you want to set the dates to your home town.