The best of the cooking apples, this is a very vigorous growing tree and in all but the largest gardens needs to be grown on a dwarfing rootstock. See below for more specific details.

Not only does a Bramley grow to a larger tree than average but it also produces a massive crop of apples. This is a cooking variety where the flesh turns to a puree when cooked. It has the perfect balance of acidity and taste.

It is a triploid variety and this means it cannot fertilise itself nor can it fertilise other apple trees (see below for more details).


The parents of the Bramley's Seedling are unknown, it was discovered growing in a Nottinghamshire garden in 1856 when its potential as a commercial variety was realised. The original tree is still alive and producing apples.


The apples are very large, mainly green with reddish markings on the side facing the sun. The apples are acidic and used only for cooking. They produce a hallmark puree when cooked, ideal for many recipes especially apple sauces.

Bramleys are triploid which has several implications if they are to produce a good crop of apples. Triploid apple trees cannot pollinate other apple trees, nor can they pollinate themselves because they are self-sterile

This may sound daunting but in most urban areas this is not a problem at all, nearby apple trees in other gardens and parks will do the job fine. Check our list of pollination partners for Bramleys Seedling below for more details if you are in doubt. 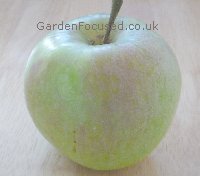 Bramley Seedling (also just know as Bramleys) produce very large trees and for all but the largest garden they need to be grown on dwarfing rootstock which will produce a more manageable tree size. We would also suggest that this variety is grown on a rootstock slightly more dwarfing than most other varieties in order that the tree will grow to the expected size.

For example, an MM106 rootstock will normally result in a tree which is about 4m / 13ft when fully grown. But with a Bramley the tree will probably grow to about 5m / 16ft in normal circumstances on the same rootstock. We would suggest an M26 rootstock would be more liable to grow a Bramley of 4m / 13ft high.

They are in flowering / pollination group 3 / C, with very attractive blossoms. The trees are long-lived (several hundred years in some cases) especially when cared for. 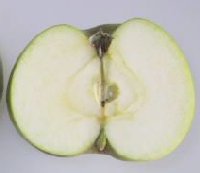 The history of the Bramley apple tree is surprisingly well-documented. The story begins with a young girl, Mary Brailsford, planting some apple pips in her back garden in Nottinghamshire in 1809.

In almost all cases apple trees grown from seed are a waste of time but in this particular case the outcome was to be one of the most famous and widely planted apple tree varieties of all time! Read our article on growing apple trees from seed for more details. 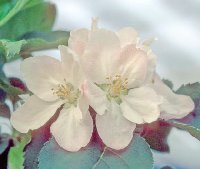 In 1846 Matthew Bramley bought the house and gardens and in 1856 an enterprising gardener named Henry Merryweather spotted the potential of the tree and asked if he could take some cuttings. Mr Bramley agreed on the condition that it was named Bramleys Seedling after him. The Bramley apple was born as a commercial apple being awarded an AGM by the Royal Horticultural Society many years later.

The original tree is normal sized and there was speculation many years later that the current Bramley trees has mutated along the way into a much more vigorous tree. To prove this botanists grew a new tree from the original and indeed they found them to be 20% smaller than the Bramley tree we know nowadays.


Bramleys are about average as far as pests and diseases are concerned. For a full description of common apple pests and diseases click here. This variety however does suffer in particular from two diseases, both of which are discussed below:

BITTER PIT
Bramley's Seedling apples are very prone to bitter pit and the symptoms are small brown  / black marks on the surface of the skin. Cutting the apple in half reveals that under the brown surface marks the flesh of the apple is also stained. The picture shown below is rather extreme but it does illustrate the effects very clearly. 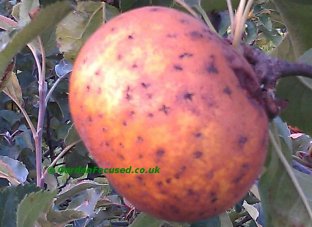 SCAB
This is the other scourge of Bramley apples is scab which primarily affects the leaves and the general health of the tree. In spring the leaves have small yellow patches on them which soon turn brown. In July / August the leaves fall prematurely and prevent the fruits from developing correctly. The primary treatment for the home gardener is to pick up and destroy all fallen leaves because these contain the spores which cause re-infection next year. Click here for more detailed information on apple scab.


Bramley's Seedling is the most popular cooking apple tree in the UK and is available at almost all garden centres , plant nurseries and online. For an average sized garden we would suggest growing this variety on an M26 rootstock to curb the natural vigour of the tree. It can grow to quite a size on an MM106 rootstock.

If you prefer to pick up your apple tree yourself from a garden centre then do remember that it is well worth keeping a look out for the special prices that supermarkets and diy stores offer on this very popular variety. Aldi supermarket stands out a long way offering apple trees at the cheapest prices if you can pick them up yourself. You will need to wait to mid-November onwards because they only sell bare-rooted trees but if you are lucky enough to get the timing correct when they are in stock you will definitely bag a bargain.

But do remember, discount prices come at a price, especially at supermarkets! You will in effect be buying "seconds" and that runs the risk of the variety not being true to the description. You also run the increased chance of diseases which only become apparent two or three years after planting your tree. Only you can work out if the saving of a few pounds is worth the risk.

TASTE AND TEXTURE: Acidic, cooks to a puree, perfect for cooking

SUITABILITY FOR CORDON / ESPALIER GROWTH: No

The average flowering time (optimum time for pollination) and date when fruits are ripe in the UK for the Bramley's seedling apple tree are set out below. If you have set your home town we can give you a more accurate estimate, if you have not set your home town (do it now by clicking here) the dates below will be the average for the UK.

Your town has not been set, the average main flowering time for Bramleys Seedling in the UK is the second week of May. Fruit will be ready for harvesting in the first week of October. Click here if you want to set the dates to your home town.

Bramley's Seedling is self-sterile and needs a pollination partner. Suitable pollination varieties include the following: