In the apple tree world much fuss is often made about customers choosing the correct pollinating partner for an apple tree. In truth though, 90% of apple trees in the UK can quite successfully be pollinated by apple trees in other nearby gardens, parks and even by crab apples growing wild.

Below is our easy to use pollination partner finder for you to use. Before acting on the varieties you are given though read the detailed information which is lower down this page.


Choose an apple tree variety from our list below to find out which other varieties are suitable as pollination partners.


WHAT IS APPLE TREE POLLINATION


All apple trees need to be pollinated if they are to produce apples. This involves the transfer of pollen from the anther of their flowers to the stigma, also within their flower. Pollination occurs in nature by insects (mainly bees in the case of apples) crawling into the middle of a flower where they pick up grains of pollen from the anther and then further crawling around a flower they deposit the pollen on the stigma which causes pollination to occur.

If only life was that simple with apple trees! Unfortunately there are complications with this process. The first complication is that most apple trees, but not all, are self-sterile. This means that they cannot use their own pollen to fertilise themselves. They need the pollen from a different apple tree variety to be transferred onto the stigma of their flowers. In most circumstances this is not a problem because bees fly from one tree to another all day long and they do this over several hundred yards, a mile or two in some cases. This ensures in most cases that any given apple tree is pollinated by other nearby apple trees.

So when one apple tree is beginning to flower and another one is at the end of its flowering period the bees can still do their job of pollinating successfully. 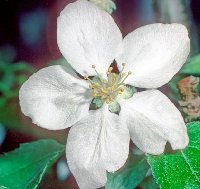 In fact there are two systems commonly used. One involves numbering apple tree flowering periods from 1 to 6 (with 1 being the earliest and 6 being the latest in the year), the other uses the alphabet from A to F to achieve the same result. Luckily enough letter A corresponds to number 1, letter B to number 2 and so on making it easy to understand both systems.

Another factor which greatly helps the pollination process between different varieties is that a large majority of popular apple trees are either in group 3 / C or group 4 / D allowing pollination to occur between a very large number of common apple trees - not all but definitely the majority.

Two more specific types of apple tree exist as far as pollination is concerned. The first, and most helpful of these are the apple tree which are self-fertile to some degree or other. These varieties, such as Braeburn and Falstaff can not only fertilise themselves without other varieties being present but also fertilise other apple trees. Having said that, even self-fertile varieties produce a larger crop if a suitable pollination partner is nearby.

The final paragraph on pollination groups goes to apple trees which are called "triploid. Our page here describes these in detail. In summary, a triploid variety is self sterile and therefore cannot pollinate itself. In addition it cannot pollinate other apple trees.

It's unusual in the UK for the temperature to stay this low during the entire couple of weeks when your tree is in blossom and a couple of days at or above these temperature will allow the bees to do their work. If you live in a particularly cool area of the UK and suspect low temperatures may be a problem then it's probably best to choose a variety which will pollinate at lower than normal temperatures, Red Falstaff and Spartan are two varieties which cope better than most with cold temperatures at pollination time.

Cold weather at blossom time not only affects apple trees, it can also prevent bees and other insects from doing their pollination job. If this is the case select a variety which comes into blossom later then normal, Braeburn is good choice for these situations.

If you only have one variety of apple tree in your garden or you suspect the varieties you have are incompatible then at blossom time take a trip into the countryside and look for crab apples which are in blossom, they often grow along country roads and in hedges along paths. Cut some stems which are in blossom and put the stems in a bowl of water. If you place that nearby your blossoming apple tree the bees will be more than happy to transfer the pollen and this may well solve your pollination problem.